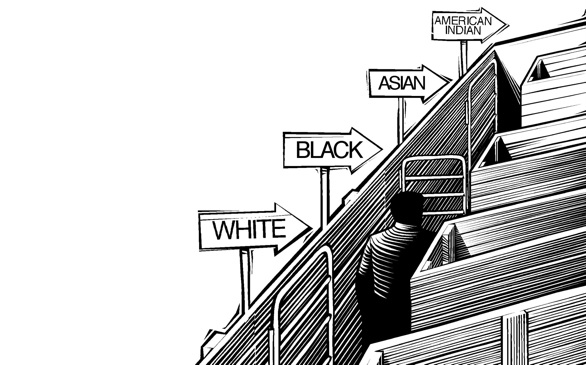 A proposal to restore affirmative action in the state higher education system has divided the Asian-American community across California, largely along ethnic lines that mirror the groups’ primary socioeconomic status.

Some groups representing larger and more established Asian populations such as Chinese-Americans oppose the proposal asking voters to consider doing away with Proposition 209’s ban on the use of race, sex, color, ethnicity or national origin in recruitment, admissions and retention programs at California’s public universities and colleges.

The proposed Senate Constitutional Amendment 5 by state Sen. Ed Hernandez, D-West Covina, would allow schools the option to again consider those factors in decisions, but would not make it mandatory.

The Joint Chinese University Alumni Association sponsored a high-profile rally expressing their “strong opposition” to the proposal last week in the San Gabriel Valley, arguing it would punish their children for working hard to achieve the American Dream. But other Asian-Americans, such as Cambodian-American Seng So, argue that Asian groups who face considerable disadvantages stand much to lose by not supporting the proposal.

“We want to ensure that communities that have dealt with struggle or issues that have set them back are able to find opportunities and find success, whether it be through the educational arena or in society in general,” said So, who works with Cambodian and other Southeast Asian boys and young men at the Long Beach-based Khmer Girls in Action. They should also “have support systems that allow them to gain access to institutions that have historically been denied to them.”

While the measure affects all ethnic groups around the state, so far Asian organizations have been the most vocal about its impacts.

Only 13 percent of Cambodian-Americans and 12 percent of Laotians in Los Angeles County have a bachelor’s degree or higher, compared with 47 percent of Chinese and 44 percent of Caucasians, according to U.S. Census Bureau estimates from 2006-2010.

But in the affluent San Gabriel Valley suburb of San Marino, Chinese-American Vivian Chan said the idea of affirmative action goes against the nation’s democratic values.

“This particular bill is saying the university can choose one student over another because of their (skin) color,” she said. “On the basis of American rights, it’s wrong.”

Chan worries that her youngest child’s chances of being accepted into the college of her choice — she’s now a junior at San Marino High School — could be hurt if she had to contend with affirmative action applicants.

“You’re taking all these American students who work hard all their life and you’re not going to have an opportunity even if you qualify because of your skin color?” she asked.

There are very different opinions emerging from the broader Asian-American and Pacific Islander community on the issue of Senate Constitutional Amendment No. 5, said Karin Wang, vice president of programs and communications at Asian Americans Advancing Justice-Los Angeles.

“The side that opposes the bill is getting more attention right now but there are a lot of Asian-American and Pacific Islander groups that are hugely underrepresented in the higher education system, groups from Southeast Asia, primarily refugee groups — Cambodian, Laotian, Hmong,” Wang said. “Those are communities that are not getting a spotlight in this debate, but they are Asian-American communities that would hugely benefit from the ability to consider race or ethnicity more directly.”

About 60 percent of Asian-Americans — and roughly 75 percent of African-Americans and Latinos — voted against Prop. 209, which banned affirmative action in the state, 18 years ago.

Hernandez contends his bill would allow voters to decide if they want to increase diversity and “have equal opportunity for everyone in the state.”

Race or gender would be just one factor that could be considered by a university or college, he added, out of many others now taken into account. It would not create quotas, he said.

Some activists argue that Prop. 209 didn’t necessarily usher in big gains for Asian-Americans. At UC Berkeley in the nine years prior to Prop. 209, Asian-American and Pacific Islander freshmen increased nearly 16 points from 26 percent to 41.9 percent, but in the much longer 16-year-period when affirmative action was banned, these communities only increased another 6 points to 48.2 percent, according to the Joint Policy Report on Asian-Americans, Pacific Islanders and Higher Education Diversity released this week.

Latino communities have not been as vocal about Hernandez’s proposal but they would likely support it overwhelmingly if it were to reach the ballot, said Fernando Guerra, professor of Chicano Studies and Political Science at Loyola Marymount University.

That’s because it would provide more opportunities for the Latino community and their high school graduates and provide a more level playing field given the current status of K-12 education, he said.

One way the idea may become more attractive to some Asians is to guarantee that it would not take away from other students who would be coming in. But that would take additional funding, Guerra said.

So if there are 100 open seats now, the university could add four or five more seats so that the “Asians that got in before will still get in.”