Fear Factory: Working the Swing Shift on the Production Line at Fear Factory 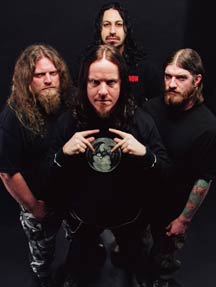 School, the Los Angeles native had turned beating the skins into a full-time job as a member of Fear Factory.

"We used to go to backyard parties," Herrera says, recounting the band’s formative years. "People would have techno parties at their houses; we kind of did that more than anything else."

Herrera’s ability to play with absolute precision at machine gun speed would become the backbone for Fear Factory’s cyber-metal sound. The band’s current lineup of Herrera, singer Burton Bell, guitarist Christian Olde Wolbers and bassist Byron Stroud stayed in the backyard for the filming of their latest video, choosing to shoot the title cut from their new release Archetype (Liquid 8) in downtown L.A.

"It was [filmed] on the Herald-Examiner building overlooking the Staples Center," Herrera explains. "We were on the roof and then inside, downstairs in the main hall. But I think the roof shots turned out the best. The sun was setting and they wet the roof down a little bit to give it a shine, then they put down this plastic that looked like glass. It looked really cool!"

Fear Factory is always given to throwing their fans a curve, like an extra heavy version of Kurt Cobain’s "School" on Archetype or literally playing musical chairs with their lineup (Olde Wolbers used to hold down the bass chores). Even more unexpected are the extra curricular activities that Herrera indulges in when he has a minute away from the band.

"I’ve been involved in the video game industry since 1995, trying to get Fear Factory on different games," says the owner of Herrera Productions. "I met a lot of very important people in the industry, big players, and a lot of them are my friends.

"It got to the point where a lot of these people would call me asking for this or that, things that had nothing to do with Fear Factory. We weren’t going to change the style of Fear Factory just to get on video games, so I figured I’d start a company to handle all types of audio — the complete package."

While Fear Factory was busy recording Archetype, Herrera was doing double duty, also working on the soundtrack for the film Mischief Invasion. Herrera’s voice surges like one of his drum barrages when he talks about the side project.

"I just kind of stumbled onto that," he recalls. "They needed music but they didn’t have a music budget. So I told them I’d give them the music for no pay and take the rights to the soundtrack, and get paid that way."

Herrera has also scored TV commercials and done music and effects for numerous video games. "That’s all I did when I was a kid — music and video games. That’s still all I do. That’s my job! I’m kind of breaking the mold, the cliché about drummers. We’re not supposed to be very smart."

Another of Herrera’s passions — one that keeps him going — is also a throwback to his high school days of patio Fear Factory gigs. The musician admits that he "messes around with weights a lot" and does cardio workouts.

He’ll need his stints at the gym to keep up the pace. Still up this year is the shooting of another video from Archetype and his first turn at production work with up-and-coming band Kriya. And of course, lots of video games.