2006 Winter Olympics: A Guide to the Turbin Games 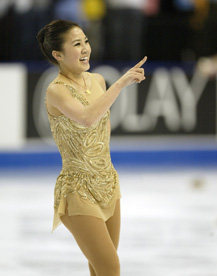 A few will lament that the season’s best women’s skater, Mao Asada, 15, of Japan, did not meet age rules for participation. But no one beats Michelle Kwan when it comes to capturing hearts and headlines.

Reigning world champion Irina Slutskaya of Russia is favored, but it’s not as simple as Kwan vs. Slutskaya. Kwan could finish lower than U.S. teammates Sasha Cohen and Kimmie Meissner. And Japan has several medal contenders.

This was the event that produced duplicate gold medals at the 2002 Olympics. The pairs judging scandal galvanized a new scoring system.

Salt Lake City Olympic pairs champions Jamie Sale and David Pelletier of Canada and Elena Berezhnaya and Anton Sikharulidize switched to the skate tours and won’t be in the hunt when the new points-based system makes its Olympic debut at the Palavela.

The 2002 Olympic champions have moved on, opening the door for a Russia-U.S. duel: world champions Tatiana Navka and Roman Kostomarov vs. Tanith Belbin and Ben Agosto.

Apolo Anton Ohno, 23, of Seattle, rose to prominence at the 2002 Games, where he won a gold and a silver medal. He got his gold in the 1,500 meters after South Korea’s Kim Dong-sung crossed the finish line first. A tide of South Korean rancor followed Kim’s disqualification for bumping Ohno, whose second place then was upgraded to first.

The United States is becoming a force in the sport and could have its best showing. No American has ever medaled in singles, but Tony Benshoof of Minnesota is in second place in the World Cup standings.

In doubles, the U.S. has a chance to earn its first luge gold with the team of Mark Grimmette and Brian Martin. If they medal, they will become the first U.S. males to do so in three consecutive Winter Games.

This sport’s return to the Games gave the U.S. a glory story in 2002. Jim Shea Jr. and Tristan Gale captured gold and Lea Ann Parsley won silver to give the U.S. three of the six medals. Shea and Parsley have retired, and Gale did not make the Turin team.

Noting that the U.S. has failed to medal in 43 Olympic events doesn’t begin to pinpoint where Americans have stood in this combination of cross-country skiing and shooting. Both the women’s and men’s sides are adding a fifth event involving medalists from the previous events.

At first glance, this looks like shuffleboard on ice. It’s a "lifetime" sport that often features players in middle age. That’s why the U.S. women’s foursome looks out of place with an average age of 23. The team could earn the first U.S. Olympic medal in curling after finishing second in last year’s world championships.

Pete Fenson, 37, leads the U.S. men. Canada is considered the world’s best, but neither squad took gold in 2002 after finishing first in round-robin play.

The sport is still getting over seeing three gold medalists stripped of eight medals after they tested positive for drugs at the 2002 Games.

Kris Freeman has had the best results by an American in 30 years. But in his three World Cup races this season, his best finish was 18th. Andy Newell, only 22, might be in the mix in the sprint.

On the women’s side, Norway’s Marit Bjoergen won four of the first five Cup races. Beckie Scott of Canada and Czech Katarina Neumannova have three wins each.

In the Olympics, the best individual U.S. finish is Todd Lodwick’s fifth in the sprint in 2002. Americans have largely bypassed the World Cup circuit this season, but Lodwick, who has six career Cup wins, was second and third in the last two pre-Olympic events.

Daron Rahlves considers an Olympic medal the one thing missing in his career. But right there with him is an Austrian trio – Michael Walchhofer, Fritz Strobl and Hermann Maier. And no matter how wildly inconsistent Bode Miller has been this season, you can’t count out the 2005 world champion in the downhill and super-G.

All the same actors will have parts in the super-G. But you can also throw in Austria’s Benni Raich.

In the giant slalom, Raich, Maier and Miller are again strong contenders.

Betting on Janica Kostelic of Croatia or Anja Paerson of Sweden is like betting on black or red at the roulette table. One of the two could win any event.

Note that neither Kostelic nor Paerson is Austrian. And you shouldn’t bet against Austrian skiers. There are at least a half dozen Austrian women capable of winning gold medals, chief among them Michaela Dorfmeister, Marlies Schild and Alexandra Meissnitzer.

Anders Huagen won the only U.S. medal in ski jumping 82 years ago, but he didn’t get his bronze medal until 50 years later, when an error was discovered in the scores from the 1924 Games. It will take another error for the U.S. to medal this year.

Freestyle skiing is advancing by leaps and bounds – literally.

Four years ago, moguls rules prohibited a skier from doing any stunt in which his skis went over his head. Now everybody is doing "off-axis" stunts, and quite a few are going fully inverted.

Four years ago, Czech Ales Valenta won the aerials gold medal when he threw a trick with three flips and five twists. He was the only one doing it then. He won’t be this time.

Were it not for Norway’s Kari Traa, American and Canadian women would be dominating moguls. Canada’s Jennifer Heil leads the standings, and 31-year-old Michelle Roarke is No. 2.

Dale Begg-Smith, a 21-year-old Aussie who has won four World Cup events this season, is the man to beat. But there are plenty who are up to it, starting with Toby "Awesome" Dawson.

It’s hard to pick against the Chinese women in aerials. Four have won World Cup events this season, led by world champion Li Nina. If anybody can beat them, it’s Evelyne Leu of Switzerland, the silver medalist at the ‘05 World Championships.

The Canadians are so strong that they’re not taking Ryan Blais, one of only six skiers in the world who have won a World Cup event this season, to the Olympics. Instead, they’re taking Kyle Nissen and Warren Shouldice, who are Nos. 1 and 2 in the rankings, Jeff Bean (No. 8) and Steve Omischl (No. 25 but the reigning world champion).

Quantity and quality should again be no problem for the U.S., though some faces have changed. The brightest new star is Shaun White. Women’s and men’s snowboard cross have been added, and the U.S. boasts four of the top 10 men in that.

Texan Todd Hays helped the U.S. snap a 46-year medal drought in the sport with his four-man silver medal in Salt Lake City. Jill Bakken and Vonetta Flowers won gold in the Olympic debut of women’s bobsled. Flowers will compete in Turin with Jean Prahm. Bakken is an alternate.

Such is the passion for hockey north of the 49th parallel that there’s national debate over the last benchwarmers named to the roster, maybe something close to arguing over the final at-large teams invited to the NCAA basketball tournament.

The maple leaf again boasts quality and quantity. Though the players come from 16 NHL clubs, 10 played on the 2002 gold-medal team for returning coach Pat Quinn of Toronto.

For the U.S. team, the question mark is between the pipes, where Rick DiPietro, Robert Esche and John Grahame will compete for the No. 1 spot and could be the key to the U.S.

It will be stunning news if Canada and the United States don’t win their respective groups and meet again on Feb. 20. The Canadians lead the all-time series, 37-26-1. They’re dance partners who have learned each other’s every move.

Distributed by Knight Ridder/Tribune Information Services.
Article posted on 2/7/2006
This article has been viewed 2898 times.