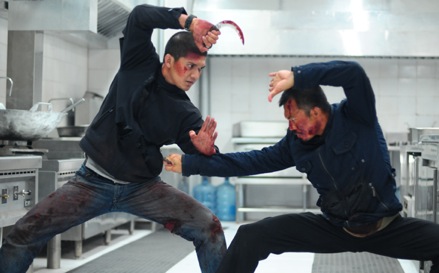 Left to right: Iko Uwais as Rama and Cecep Arif Rahman as The Assassin.
(Credit: Akhirwan Nurhaidir and Gumilar Triyoga)

In The Raid 2: Berandal, our bloodied and bruised hero, rookie cop Rama (Iko Uwais) who just managed to kill hundreds of baddies essentially single-handedly and with the most killer flare, is faced with a proposition: go home to his family in peace while living in fear of retaliation by the underground crime syndicates or take on the role of undercover cop and infiltrate the system and destroy it from within, exposing the corruption within the Indonesian police, as well as taking down those who could bring his family harm.

Welsh writer/director Gareth Evans once again leads us into the beast's belly, using Rama as our torch to light the way. But this time, with Rama dancing with the devil, his moral center is tested as he is dragged deeper into the ultra-violent crime world.

The point that it is a world is the definitive element of The Raid 2, in contrast to its predecessor. In the first installment, Evans presents us one building—one building where absolutely everything takes place. It plays sort of like a videogame, with different levels and bosses to beat and with the biggest and baddest of them all waiting up at the very top.

While The Raid 2 can still be viewed as a videogame, it is a far more complex and rich one. There are various worlds to explore, well-developed characters to meet and much higher stakes at risk.

Back in 2009, Evans wrote a script titled Berandal, but with numerous complicated scenes and no one willing to invest in the high budget, he was forced to think of a simpler story to focus on. Thus, The Raid: Redemption was born. But while working on part one, Evans realized the script for Berandal actually may be of use.

“I thought: ‘Well, if we can make him an undercover cop, and if he’s the same cop as the first Raid and somehow this is all tied into what happened to that building, then that fixes a lot of problems that I had with the original script,’” he explained.

It turns out he only had to retrofit about 25 percent of the original script to support the first film’s narrative.

However, Evans knew he wanted to take the sequel to a new place, especially with the creative freedom that the higher budget and acclaim gave him.

“We knew we were shooting on a wider format using the Red Cam, and we knew that the resolution would be so much better and we could take in a lot more color details,” he said. “So, we started to think: ‘Well, let’s make this a lot more cinematic. Let’s make sure when we’re not running around doing action sequences that we take time to sit back and get those big wide shots and get those grander, bigger-scale production-value shots.’”

And this sequel really is more cinematic. The opening shot welcomes us to a vast sugarcane field, which Evans admitted to have been a direct influence from Martin Scorsese’s Casino (1995), and the screen oozes a quality that Evans hasn’t shown in his previous work.

But for many fans of the first film, it’s not the cinematic quality that they remember; it’s the badass, kickass and hardass fight scenes that got them pumped for more.

Pencak silat, Indonesia’s own martial arts form, is the star of the show, and Uwais is the ultimate master. Training for months on end for the films, the star and choreographer (along with returning fan favorite Yayan Ruhian), reveals even more tricks up his sleeves as Evans sets him up in new and outrageous situations.

The director even introduces us to Indonesia’s first-ever major car chase scene, which Uwais and Ruhian douse with unbelievable choreography (Unfortunately for us, Evans promises he’s “not doing a f***ing car chase again”).

With a runtime at about two and a half hours, Evans’ The Raid 2 brings a heavy dose of what eager fans have been waiting for but with added emotion and context to the, some may say, gratuitous violence.

And apparently Evans is the gift that keeps on giving; not only is he going to release epic deleted scenes in a couple of weeks as well as a behind-the-scenes documentary, but we can all saddle up and get ready for a third and final installment of The Raid! Spread the news: more kickassery to come.

The Raid 2: Berandal releases in Los Angeles at the Arclight Hollywood, The Grove, AMC Century 15 and Regal L.A. Live, and in New York at Lincoln Square, Regal E-Walk and Regal Union Square on Friday, March 28, 2014.

Enter to win a poster for The Raid 2 by clicking here.