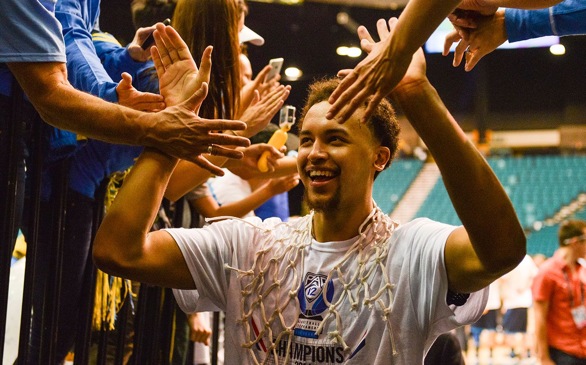 Steve Alford was talking NCAA Tournament happenings to reporters on Selection Sunday with the backdrop of 110 national championships behind him. Of course, all that bling can’t fit in one camera lens.

“Only UCLA would put me with this background,” Alford said with a laugh.

And only this backdrop delivers the kind of reminder and unique pressure that comes with being UCLA’s basketball coach.

“We’re as good as anybody, and we’ve proven that,” Alford said. “We have a chance to go a long way. I let them know that. I feel we have that confidence and can continue to be who we are. And above all else, we need to make sure we’re having fun.”

UCLA boasts the most overall national championships of any school in the country, but the Bruins’ haven’t won one in basketball since 1995.

Alford, in his first year as UCLA’s coach, engineered a season that resulted in the No. 4 seed in the South Region and two games in San Diego, if UCLA beat Tulsa in its first game.

“It’s amazing,” Powell said “You can never put into perspective what this school has done. It’s priceless to think I go to a school that has this much tradition. You want to be here. Champions are made here. That’s been our motto for a while.”

UCLA is the Pac-12 Tournament champion, and that upset championship-game victory over Arizona has paid priceless dividends.

ESPN’s mock bracket had UCLA as a No. 6 seed in San Antonio before the conference tournament. Now, UCLA’s road to the Sweet 16 runs through San Diego.

Alford had nearly lost his voice, but he’s winning in every department.

When the Bruins were clobbered by Washington State nine days ago, UCLA’s mettle was tested. The Bruins responded with three impressive wins in the Pac-12 Tournament over Oregon, Stanford and Arizona.

UCLA hadn’t put together a road winning streak to speak of until its Las Vegas winnings totaled three straight games.

“To be able to win three against those teams — that’s not easy back-to-back-to-back,” Alford said. “I hope we can carry a lot of momentum into the NCAA Tournament now.”

UCLA is playing its best basketball at the time the NCAA rewards such success. The Bruins earned a better seed and a drive down the 405 Freeway. UCLA had Sunday off and is also off today and will return to practice Tuesday afternoon. The Bruins have time to concentrate on finals the next two days as well.

Could the road to Dallas be better paved? Sure, if UCLA had been in the West region. Then it would have had two possible games in Anaheim. But you can’t win everything.

Winning that conference title game against Arizona meant everything.

“When we started the conference season and lost to Arizona (79-75 at Pauley), we knew we could play with anybody,” Bruins guard Kyle Anderson said. “That last game proves we cannot only play with anybody, we can beat anybody.”

That kind of swagger is immeasurable. And thanks to Pac-12 regular-season champion Arizona, UCLA has earned a lot of it in those games against the Wildcats.

That feeling in March is immeasurable. You think No. 13 seed Tulsa, and after that VCU or Stephen F. Austin, would want to see UCLA as a No. 4 seed in a second game?

“We’ve proven we can compete with anybody at a high level,” Powell said. “We’ve increased our confidence, and that’s shown we have faith that we can make a run.”

The goal is to put another championship trophy in the hall of fame room in the J.D. Morgan Center.

The road for UCLA is a more confident one now that it’s starting through San Diego.