The Supersuckers: Get the Hell 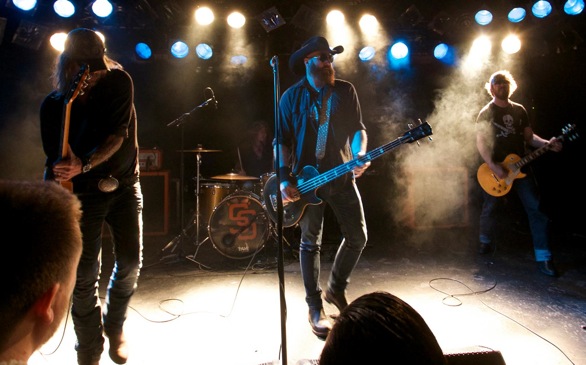 Seattle foursome the Supersuckers have always given the middle finger to mediocrity -- and apparently so do their fans based on a concert photo inside the fold-out digipak for Get the Hell, the group’s ninth and latest studio album.

The Supersuckers' mix of amped-up cowpunk and rock continues to hit hard. The band took five years off, and evidently the break intensified their energy levels; Get the Hell is the best thing since their 1990's heyday.

Guitars are turned up LOUD, bass and drums never falter, and there are no quiet moments. The Supersuckers literally bash and crash through 12 tunes (plus an intro piece).

Bassist/vocalist Eddie Spaghetti’s preoccupations with self-indulgence and bad behavior are fully displayed as he gorges on women, wine and music in “Gluttonous.” He consumes cheap beer and self-administered meds in “High Tonight” and verifies his own undependable tendencies on three train-wreck tracks: “Disaster Bastard,” “Bein’ Bad” and “Fuck Up.” Even two unexpected covers (Depeche Mode’s “Never Let Me Down Again” and Gary Glitter’s “Rock On”) are fiery and ferocious.

If someone is seeking subtlety, this isn’t it.

The Supersuckers will open for the Toadies on March 24, 2014 at the Troubadour.