How the Sabotage Cast 'Pumped Up' for Their Roles: Arnold Schwarzenegger, Josh Holloway & others get down to business. 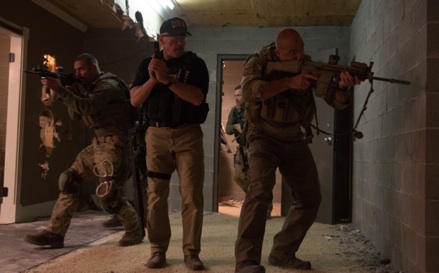 The too-fresh memories of an earthquake reverberate through the tiny Beverly Hills room on St. Patrick’s Day morning, and it feels as though another temblor is occurring when a great wall of manhood enters. Muscle and might rule the day as Arnold Schwarzenegger, Joe Manganiello, Josh Holloway, David Ayer and two of Los Angeles law enforcement’s finest march in to discuss the gritty thriller, Sabotage.

The hard-boiled drug-raid action flick stars California’s former governor as a renegade DEA agent who serves as the father figure for an elite team. The gnarled crew (Manganiello, Holloway, Terrence Howard, Sam Worthington and Mireille Enos) goes for broke in a high-stakes bust, and plays hard and fast with ethics. The gray area of morality turns into one of mortality when members of the team are killed one by one.

Though audiences are used to seeing Schwarzenegger in furious action roles, his character in Sabotage is far from the indestructible Conan the Barbarian. His “Breacher” is swarthy yet tormented by the great toll police work can take on a person.

“I love that [David Ayer] pushed me. Because sometimes directors get intimidated by a movie talent like me,” the native Austrian said with a laugh.

Filmmaker Ayer is no stranger to pushing screen legends beyond their perceived limits. He penned 2001’s Training Day, the ultra-realistic crime drama that nabbed Denzel Washington his second Oscar. The Navy veteran kept the realism alive in Sabotage, enlisting the help of L.A. law enforcement pros Capt. Jaime FitzSimons (who also advised and was the inspiration behind 2012’s End of Watch) and Deputy Mark Schlegel.

And train they did. FitzSimons and Schlegel molded the saboteurs into crime-fighting warriors. Months of weapons detail, rigorous exercises and ride-alongs were required to nail the film's authenticity.

Schlegel tipped his hat to the troupe’s transformation and said, “Where are the actors on set? Because this looked like a SWAT team.”

Not that these were 98-pound weaklings to begin with. For example, Manganiello, best known for his brawny roles in Magic Mike and “True Blood,” is a professional bodybuilder who recently wrote a book on the subject, with a foreword by Schwarzenegger himself. The two became fast friends on the Atlanta Sabotage set, fulfilling a childhood dream of the younger man.

“I’d seen every movie. I’d have 10-, 20-minute conversations with my brother in Arnold’s voice doing all of his movie lines without breaking character,” Manganiello said mirthfully. “The reason I picked up a weight in the first place and ever started bodybuilding was because of Arnold.”

Not only did the cast pump up for their roles as DEA enforcers, they also got extreme makeovers. Schwarzenegger got covered in fake tattoos and underwent a dye job that made him look grizzled and weather-beaten. Worthington, who plays the paranoid but good-hearted Monster, slapped on a Metallica-ready braided beard to his usually well-trimmed chin. And Holloway, whom the world recognizes as sexy Southerner Sawyer from “Lost,” practically became a new man.

“I was so excited to work with David and so excited to shave my head and do something cutting-edge,” Holloway said with a boyish glee. “First thing, he’s like, ‘I want you to be the preppy guy. The guy that, you know, is unassuming and you wouldn’t think he’s a killer.’ And my heart just sank.”

He laughed and continued, “So, I somehow got him frustrated about it because I kept asking…He’s like, ‘OK, fine! Go SCUD it out.’ Like SCUD missile. And when I came back, I had a shaved head with a big mustache. He’s like, ‘What did you do?!’ I’m like, ‘You told me to SCUD it out.’”

Additionally, to dig further into the brutal world etched out in Skip Woods’ script, the team shot in Atlanta, a noted hotbed for narcotics activity. There, Ayer was granted access to the Richard B. Russell Federal Building, and he hired real Atlanta police officers as background drivers and extras. (Why not base Sabotage in Los Angeles, like so many of Ayer’s other works? The director says Georgia’s tax incentives were palatable, to which former Gov. Schwarzenegger sarcastically sneered and retorted that he granted his state $500 million in filming incentives during his time in office.)

Given the amount of adrenaline and shock value that runs through the feature, this isn’t your father’s Schwarzenegger movie. However, it does have enough of a throwback feel that it won’t alienate the "Terminator's" longtime fans.

Producer Bill Block noted that in this world of frivolous green-screen and computer-generated effects, moviegoers will enjoy Sabotage for its use of flesh-and-blood stunt people and true-to-life action.

Ayer agreed. “For me, no amount of CG or green screen or water work can beat the visceral, gut-wrenching quality of a really well-done practical stunt,” he said. (He also confirmed 66-year-old Schwarzenegger still performs many of his own perilous scenes. Hasta la vista, aging!)

Enter to win a Sabotage prize pack by clicking here!