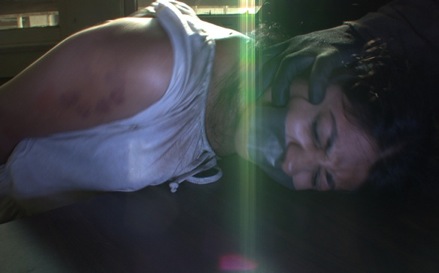 Welcome to The Den, the newest site for social media that strips away the physical limitations of distance and brings the world to your computer screen. Our users have discovered the endless possibilities of face-to-face communication, allowing them to meet hundreds of people within minutes without ever having to leave the comfort of their own home. Whether you’re looking to make a friend, find a date, or just have some fun, The Den provides a service like no other. Just click “Find a Friend” to get started.

*Disclaimer: The Den is not responsible for any negative transactions that occur on the site.

Elizabeth8 has joined The Den.

With The Den, first-time director Zachary Donohue has brought us a mash-up of two of the most tired subjects in film today: social media and found footage. The film takes the concepts of popular sites like Chatroulette and Omegle, and puts a  predictable horror spin on the plot of meeting strangers on the Internet – or that’s what you might initially think…

When Elizabeth (Melanie Papalia) receives a grant to perform a study on the impact of sites like The Den on relationships, cyber-bullying and human interaction, she thinks she knows what she is getting into. For three months, she will log onto The Den 24/7, recording all her webcam interactions, documenting anything and everything.

At first, it’s an expected smorgasbord of pranking kids and creepy men doing what you expect them to be doing, peppered with the occasional meaningful conversation about why people use the site.

Eventually, that all changes when Elizabeth8 witnesses a murder that will make her wish she never wandered into The Den.

Using a computer, iPhone and hidden camera footage to follow Elizabeth’s horrific journey, Donohue creates a world where no one is safe because no one is off limits. In other words, since everyone is accessible because of the wonderful world of the Web, everyone is game to be killed. Naturally, it’s Elizabeth and her loved ones who become targeted, and it’s up to her to take back control of her life before they do.

This story in its simplest form may seem boring and clichéd, and at first, it is. Donohue and co-writer Lauren Thompson create a slow setup. However, perhaps that was intentional, to lead you down the path of expectation and then yank you down the rabbit hole. It’s almost as if The Den is masquerading as something overwhelmingly formulaic, which seems to be the death of most horror films today, especially found footage films.

Then, somewhere near the end of the second act, Donohue pulls us back in and widens the depth of horror, showing us that this is something bigger. Towards the very end, which is perhaps more memorable than the film in its entirety, The Den holds up a mirror to the face of social media, and we realize we are totally absorbed in it.

Even better, our heroine Elizabeth isn’t weak. She's able to defend herself and willing to stick to her guns. Papalia does a substantial job outshining many of her horror star counterparts by simply being simple—no flares, no flashes. She is just strong and scared as hell. As a plus, there is no overt exploitation of sexuality that has become cringing-worthy and stereotypical these days.

While watching The Den, it’s hard not to think of Michael Haneke’s Funny Games (1997), a film about the terror of human capability when it’s driven mad. Similar to Haneke, Donouhe makes it clear that it was never personal, which is somehow more terrifying than if it were.

Victimization is just a matter of chance—something uncontrollable. We feel helpless and vulnerable in that loss of control, and that’s a chord Donahue strikes profoundly with The Den.

The Den opens at the Downtown Independent theater on Friday, March 21, 2014. Get your tickets here!

Read more about the Downtown Independent!