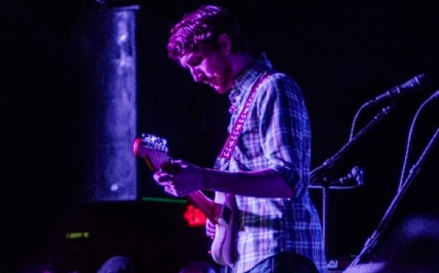 St. Patrick’s Day at the Roxy in L.A. was honestly nothing like what I expected: the crowd was quiet and stood listening intently to the music. It’s not as if that the club wasn’t full -- the show was on its second sold-out night, and the floor was packed. The silence was not out of boredom; it was sheer intent listening.

Aidan Knight, based in Victoria, is currently touring with James Vincent McMorrow in support of Knight and his folk band's 2013 U.S. debut, Small Reveal. Knight’s songs are lovely, quiet moments of storytelling. Thus, there isn’t a dire need to scream and sing along during one of his shows. In a club like this Sunset Strip venue, it was almost jarring to see a singer-songwriter take over the audience in such a dramatic way.

Working with a talented band that included a trumpet, his melancholy but beautiful lyrics, and delivery, Knight’s performance Monday night was ideal for a night out with friends or a date. More than a few of the audience members were there for not only Knight, but also his tour partner McMarrow. With their styles and fan base melding entirely, Knight and McMarrow make the perfect pair for a tour.

On his last song, Knight stepped in front of the mic and asked if the audience could hear him. Once he was assured that he could sing to the crowd without the mic, he said that “Margaret Downe” would be his last song.

“This is a song about gambling everything on love…then losing,” he said.

The audience seemed to be divided into two camps: the ones that were remembering the time they did just that and the ones that almost thought it was funny how sad the set would be at the end.

Knight’s performance of “Margaret Downe” was sombre and definitely appropriate to play in an unplugged, stripped-down format.

If you have the opportunity to take a night out with an Aidan Knight show, do not pass it up. Drink a glass of wine, or maybe something stronger (depending on your past relationships), and enjoy Knight’s beautiful and slightly heartbreaking music.