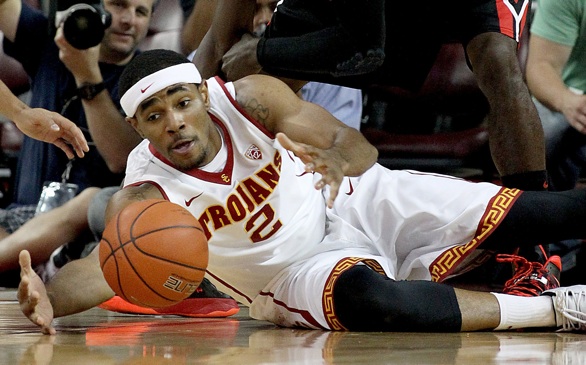 USC’s basketball season was so forgettable the Trojans ended their season last week but more fans tweeted about the football team’s Pro Day going on about the same time.

The Trojans quickly bowed out of the Pacific-12 Conference Tournament in the first round, a world away from the bravado and optimism that surrounded Coach Andy Enfield’s hiring 11 months ago. Nearly a year and only two Pac-12 victories later, Enfield went from being a miracle worker at Florida Gulf Coast to someone who inherited a bad roster and did the best he could.

At least that was the spin inside USC. Outside, tougher questions were asked. Yes, the Trojans were not overly talented. But why didn’t players get better over the course of the season? Shooting guard J.T. Terrell actually played worse than his junior year.

Enfield is supposed to be a shot doctor, who worked with NBA players but USC was one of the worst shooting teams in the Pac-12 and ranked 318th in 3-point shots made per game.

“I think the future is very bright looking forward,” Enfield said. “For those returning and for those recruits coming in, we’re very, very excited.”

Just not quite as excited as a year ago, when Enfield was the toast of the NCAA Tournament after making the Sweet 16 at Florida Gulf Coast, which led to an appearance on The Tonight Show and an ESPY.

Life in the Pac-12 was significantly different than the Atlantic Sun Conference, however. From Enfield’s view, the team will be better next season with transfers like former UNLV guard Katin Reinhardt, who will add 3-point shooting. Point guard Jordan McLaughlin of Etiwanda High School in Ontario is the jewel of the recruiting class, and Enfield likes the athleticism of 6-foot-9 forward Malik-Price Martin. Shooting guard Malik Marquetti of Long Beach Millikan was initially overlooked but his stock rose during a strong senior year.

Oh, and then there’s UCLA coach Steve Alford, who just won the Pac-12 Tournament. Enfield enjoyed making fun of Alford in private comments to boosters and players that went public. Less enjoyable was the 44-point loss Alford delivered in January, no doubt motivated by comments like, “if you want to play slow, go to UCLA.”

In order to restart the crosstown rivalry, Enfield needs a nucleus of this year’s freshmen players to develop next season: Guard Julian Jacobs showed flashes of promise and one of his best games was two weeks ago with nine assists against Washington State. Forward Nikola Jovanovic had 21 points and eight rebounds in the final regular-season conference game against Washington. And forward Strahinja Gavrilovic also oozed potential and looks like a player who could be critical.

What goes unsaid is that all of these players were brought in by former coach Kevin O’Neill, who gets little credit for anything these days.

One player who won’t contribute is freshman guard-forward Roschon Prince, who is expected to transfer. This is probably welcomed by Enfield because he can use the scholarship.

“We’ve seen a lot of improvement with particular players,” Enfield said. “So I think the future is very bright looking forward.”

Words ring hollow for die-hard USC fans. When the Galen Center opened in 2006, it was believed the program finally turned the corner and would be a perennial upper-echelon team in the Pac-12. Then came the O.J. Mayo scandal, departure of Coach Tim Floyd and NCAA sanctions.

Enfield is the latest prophet to promise better days for the program. He might be right. But USC fans have heard it before and used to being disappointed.