Spring Break in Cabo San Lucas: There's Nothing Quite Like It 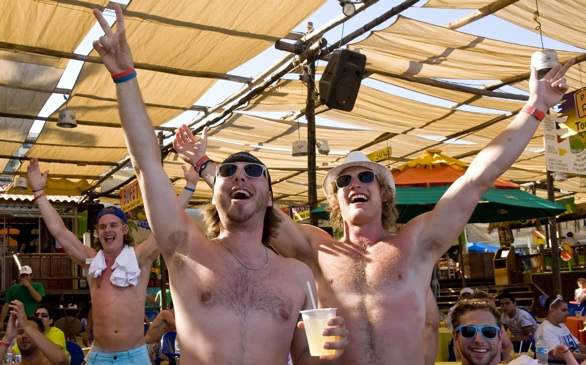 A group from Canada cheers on a friend during a beer-chugging contest at the Mango Deck.
(Credit: Leonard Ortiz/Orange County Register/MCT)

For many, the name is closely associated with The Office (not the TV show), The Mango Deck and tequila.

The lore that revolves around Cabo is filled with inebriated shenanigans and long nights at Squid Roe. In this magical place, Happy Endings is a totally acceptable name for a bar, and upside shots are expected. There are banana boats, jet skiing and countless romps into the warm ocean – along with sunburns and often embarrassing henna tattoos.

An anthropological study of the place might reveal how the average frat star and sorority girl intermingle. Somehow, complete strangers who wouldn’t say “hi” while walking around their college campus become best friends in minutes. Decisions that one would normally reject outright become the only acceptable course of action. Everything is generally wonderful, except the line for the bathroom.

It would therefore appear that piña coladas and tequila shots are the great equalizers of college.

Even outside of the “90007” area code, the USC Trojan family continued to thrive, dominating the dance floor and buying beers for one another. If someone handed you an unexpected drink or two, it was probably another ‘SC kid who bought it for you.

Though our memories may be blurry, our photos from Cabo will survive on Facebook.