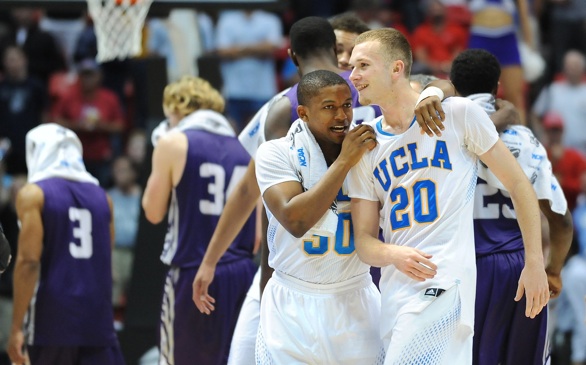 SAN DIEGO >> Well this hasn’t happened in a while. UCLA is actually having fun in the NCAA Tournament.

Tony Parker came out of Sunday’s game late against Stephen F. Austin, threw his arm around UCLA coach Steve Alford’s shoulder and the two laughed as though they were BFFs.

Parker walked down the bench, found assistant coach Tyus Edney and lifted him off his feet. Edney loved the impromptu antics.

Norman Powell was dunking often, and even though he was on the bench with three fouls he was smiling and having a good time.

This happens when you dominate an opponent, like UCLA did in a 77-60 drubbing of Stephen F. Austin. Basketball is supposed to be fun. Who knew?

Parker had a little fun at Alford’s expense during their chat at the end of the game since it was long in the bag.

“We always have a lot of laughs,” Parker said about his relationship with Alford. “He was talking about my free throws. I told him he doesn’t play defense and his hairstyle has been the same since 1947.

“It’s great how good of a coach he is. It’s so much fun playing for him. He’s a great dude. You want to win for him.”

Don’t ever remember a player using “dude” and “fun” in the same sentence under Ben Howland. Credit to Howland for getting UCLA to three straight Final Fours, which is more important than fun.

The fun factor will be a challenge for UCLA against Florida.

Only problem for UCLA is that Florida awaits, and the Gators surely are chomping at the bit. UCLA has lost to Florida in the tournament in the Final Four in back-to-back years in 2006 and 2007. Florida has ended UCLA’s NCAA Tournament run three times since 2006. This will be their fourth NCAA Tournament matchup in nine years.

Matchup not made in heaven, at least for UCLA.

Nightmares maybe? Florida (34-2) has the No. 1 overall seed, and fourth-seeded UCLA will be underdogs.

That’s later in the week. For now, UCLA (28-8) is on a five-game win streak, playing its best basketball of the season and having fun doing it.

Powell dunked on an inbounds play to start the second half, and Powell had the next one too, a sick behind-the-back layup that showed UCLA was not only winning but having a blast doing it.

“The behind-the-back move, I’ve done that since I was little in high school,” Powell said. “That’s really instincts and seeing the way (my defender) played me. I was happy to execute that play.”

All week, UCLA will be answering questions about Florida and how to beat the Gators. And how UCLA was kept from more NCAA championships by Florida in those Final Fours in 2006 and 2007.

Parker was watching those games.

“By that time I was probably going to Florida,” said Parker, who was recruited by Billy Donovan. “I was young. I watched a couple of those games. That was a big battle. There were a lot of (future) pros in that game. Those were tough hard-nosed games for us to win.”

Powell had three second-half dunks, Kyle Anderson had one and everyone was in a good place. Everyone is zen.

And the Wear twins, Travis and David, already do yoga.

“It’s a relief for all of us,” said Travis Wear. “To move on, that’s what you’re expected to do at UCLA, but it hasn’t been there in a while.”

That’s why tense shoulders and crinkled eyebrows and serious attitudes have been a constant look for the Bruins in the recent postseason.

But remember when UCLA used to have fun this time of year?

“It feels like back when I was in school,” said Edney, the director of basketball operations and engineer of the magical shot against Missouri in 1995. “I had the same kind of feeling winning games like this.”

Alford even was joking with the media. A reporter forgot a question, and Alford said: “Just make something up.”

This wasn’t as thrilling as Mercer beating Duke, but this sure was a good time.

Everyone got in on the scoring act for the Bruins. UCLA had just three turnovers. And they sure had plenty of fun.