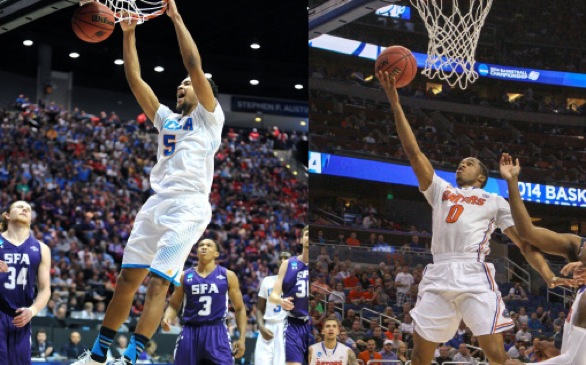 The Florida Gators basketball team has won 28 games in a row, the longest streak in the nation with NCAA Tournament losses on Sunday by Wichita State and Stephen F. Austin.

But UCLA, Florida’s opponent on Thursday in a South Region semifinal at the FedEx Forum in Memphis (9:45 p.m., CBS), might be the next hottest team in the nation in the postseason, entering the game having won five Pac-12 Tournament and NCAA Tournament games by an average margin of 16.4 points.

In contrast, the Gators have won five postseason games by an average of 11.4 points.

What Florida (34-2) may have going for it the most against the Bruins (28-8) is defense and history. The Gators have put the clamps on explosive offensive teams such as Kentucky, Tennessee, LSU and Pittsburgh, especially on the perimeter. UF also has a 3-0 record against UCLA — all in the NCAA Tournament.

The Gators won their first national championship in 2006 by beating UCLA in the title game, then knocked the Bruins out in the national semifinals the following year.

Four years ago, when the UF senior class were freshmen, Florida eliminated UCLA in the round of 32.

Donovan doubts that it will matter.

“The name on the jersey happens to be to the same one that we’ve played three different times in the NCAA Tournament,” he said. “Everything else is really a lot different.”

Such as the Bruins’ coach Steve Alford, the former Indiana star who has coached Iowa, New Mexico State and now the most successful college basketball program in history. Alford inherited a fast, athletic team that has caught fire recently in winning the Pac-12 title, including two victories over teams who have joined them in the Sweet 16, Arizona and Stanford.

One of the reasons Donovan calls UCLA a unique team is point guard Kyle Anderson, a 6-foot-9 sophomore who can play four positions. Anderson is second on the team in scoring at 14.7 points per game and leads in rebounding (8.7) and assists (6.3).

During the postseason, Anderson is averaging 13.8 points, 9.0 rebounds and 5.8 assists per game.

“It’s unique for a point guard to get as many rebounds as he does and starts the break,” Donovan said. “That’s where they’re really, really great, is in transition.”

But the Gators have UCLA’s attention also. Alford was asked about Florida within minutes after his post-game news conference on Sunday after the Bruins knocked Stephen F. Austin out of the tournament, 77-60.

“All I can tell you about Florida, other than they’re extremely well-coached, is when you talk about cultures, they’ve got a terrific culture there and a culture of winning and doing it on the national stage,” Alford said. “We know it’s going to be a very, very difficult contest.”

“We’ve got some things that make you think about matchups, because there is not another team in the country starting a 6-9 point guard,” he said of Anderson. “He’s really difficult to match up with and he creates problems. He rebounds the ball, starts transition game, moves the ball, and his defense has improved dramatically. In the last three weeks I think he’s proven, in my opinion, that he’s the best point guard in the country.”