UCLA is Pulling Out the Stops in the Postseason 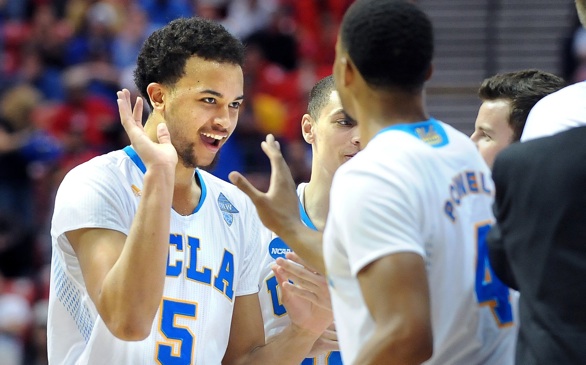 No one could confuse this UCLA team with some of the lock-down defensive units the Bruins featured under former coach Ben Howland. But it would be unfair to entirely disregard the Bruins on the defensive end this season, particularly since postseason play began.

Defense was the rubber band that wound tight last weekend in San Diego before springing the offense loose.

"It's all about our defense," said guard Jordan Adams. "We're not able to run if we're not making stops."

And the Bruins do love to run, so they went out and got stops.

In Sunday's game, UCLA started out playing man-to-man defense, until smaller Lumberjacks players beat the Bruins to the basket a few times. Coach Steve Alford then switched to a zone and his team clamped down.

"When our defense settles in and locks up, our transition takes over," Adams said.

Back-to-back 17-point victories at the sub-regional put UCLA in a South Regional semifinal, where the Bruins will play top-ranked Florida on Thursday in Memphis, Tenn.

"We have guys who run like horses in transition," said guard Kyle Anderson. "All the credit goes to our defense. I think our guys have bought into the preparation for what other teams run. We're there for each other, helping."

A cynic might suggest the Bruins merely overwhelmed cannon fodder in their first two NCAA tournament games. Tulsa and Stephen F. Austin both were underdogs from mid-major conferences.

But the Bruins started tightening up defensively during the Pac-12 Conference tournament.

Oregon shot a respectable 44% in a first-round Pac-12 game, but UCLA forced 17 turnovers and routed the Ducks.

Stanford, which has also advanced to an NCAA tournament regional, scorched the Bruins during a regular-season victory, shooting 62%. But in a Pac-12 semifinal, the Cardinal shot 39% and was buried by a stampede of UCLA fastbreaks.

In their Pac-12 tournament title-game victory, the Bruins held high-scoring Arizona to 38.7% shooting in the second half.

"We've been a good offensive team the whole season. That hasn't been a problem," Anderson said. "Getting stops was the problem."