Labor Board Rules that Northwestern Football Players Can Form Union 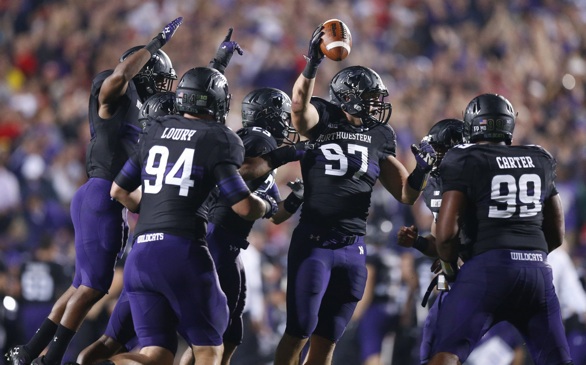 Northwestern football players have a right to form a labor union, a regional director of the National Labor Relations Board ruled Wednesday in Chicago.

The next step is Northwestern players holding an election to vote on whether to form a union.

Although many questions remain, and Northwestern surely will appeal the decision, the news is potentially ground-shaking for college sports.

Instead of student-athletes, a more accurate label could be employee-athletes.

Ramogi Huma, a former UCLA linebacker and the president of the College Athletes Players Association, said the NLRB decision “clears the way” for other major college football players and Division I basketball players at private NCAA schools to organize. Players at public schools would have to ask state labor boards to unionize; the NLRB has jurisdiction over private businesses.

Huma’s organization two months ago petitioned the NLRB for an election and the United Steelworkers paid for its legal fees.

Kain Colter, who completed his eligibility as Northwestern’s quarterback last season, became the face of college athletes’ movement to unionize. Last month, he was the first witness called by the college players association to give testimony on whether Northwestern football players should be considered employees.

Colter rattled off the long hours of practicing, playing, film study and described full days of work in the off-season. He also said players couldn’t take certain classes because they interfered with football, and that his full athletic scholarship did not cover all of the players’ expenses.

“It’s a job,” Colter testified in February. “There is no way around it. It’s a job.”

Peter Ohr, the NLRB regional director in Chicago, agreed in his ruling:

“The fact that the players undoubtedly learn great life lessons from participating on the football team and take with them important values such as character, dedication, perseverance, and team work, is insufficient to show that their relationship with the Employer is primarily an academic one.”

A union could allow college athletes to lobby for improved safety conditions and negotiate for a share of the multimillion-dollar income generated through college athletics. Kansas, for example, reported a school-record $93 million in income for the 2012-13 financial year according to NCAA documents.

“It is important that players have a seat at the table when it comes to issues that affect their well-being,” Colter said in a statement released after the decision. “Football and basketball players generate billions of dollars per year.”

Robert McCormick, a professor emeritus at Michigan State University College of Law who focuses on sports and labor law, told the Chicago Tribune that the decision is “revolutionary for college sports.”

But Northwestern and the NCAA were quick to counter and said academics trumps athletics.

“We strongly disagree with the notion that student-athletes are employees,” wrote NCAA chief legal officer Donald Remy in a statement. “We frequently hear from student-athletes, across all sports, that they participate to enhance their overall college experience and for the love of their sport, not to be paid.

“Over the last three years, our member colleges and universities have worked to re-evaluate the current rules. While improvements need to be made, we do not need to completely throw away a system that has helped literally millions of students over the past decade alone attend college.”

Alan Cubbage, vice president for university relations at Northwestern, said the school would appeal the ruling to the national board in Washington.

“Unionization and collective bargaining are not the appropriate methods to address the concerns raised by student-athletes,” he said in a statement.

“If we got into collective-bargaining situations,” he said, “I would not take for granted that the Northwesterns of the world would continue to play Division I sports.”

In other words, no more athletic scholarships for unionized athletes.

There’s also a Title IX question. If athletes in the revenue-generating sports are allowed to unionize and seek compensation, federal law demands gender equity in college sports. Northwestern could be in violation of Title IX if football players received compensation that wasn’t available to female athletes.

Huma’s association has been advocating on behalf of college athletes since 2001, but recently launched the “All Players United” movement. Many college football players, including KU’s Keon Stowers, wore the letters “APU” on their equipment during games in 2013.

The goals promoted by APU include reducing the risk of brain trauma in college athletes, raising scholarships to reflect the “full cost of attendance” at schools and preventing players from paying sports-related medical expenses themselves.

“Players will gain a number of important protections once this union is in place,” Colter’s statement continued.

But APU’s goals also include allowing players to make money off commercial opportunities or funneling money from million-dollar TV contracts into trust funds for athletes, dependent on academic performance. It’s unclear if those opportunities would result from collective bargaining.

“This ruling is a major step toward justice,” a statement from Huma read. “The courageous, enlightened young men on the Northwestern football team are demonstrating what can be accomplished when college athletes are unified. Their actions will improve the lives of the current and future generations of college athletes.”

The Star’s Rustin Dodd contributed to this report

To reach Blair Kerkhoff, call 816-234-4730 or send email to bkerkhoff@kcstar.com. Follow him at twitter.com/BlairKerkhoff.