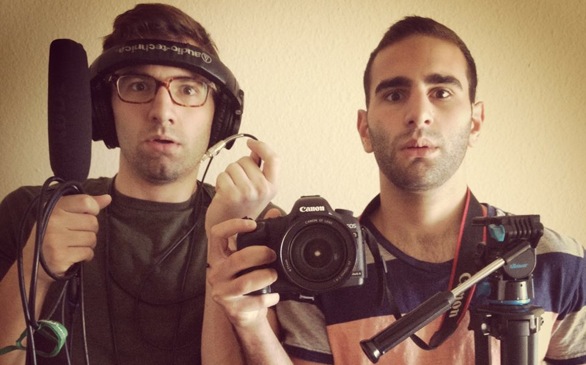 Almost Cool is a hysterically fun channel on YouTube that defines what being a college student is really like. Together, Antonir and Assam-Miller have created two different web series on the same YouTube channel: “Long Story Short,” their original series, and their newest series, “Wiener vs. Brain.”

“Wiener vs. Brain” also depicts classic college male situations where a guy has to either listen to his brain or his wiener. For example, in the “Snapchat” webisode, two "guys" argue over sending a girl a Snapchat. Wiener (played by a college-aged male) encourages the guy to send a shirtless photo, but Brain (again, another college-aged male) tells him to take it slow and proceed with caution.

In a recent interview with Campus Circle, Antonir and Assam-Miller told me more about themselves, how Almost Cool got started and their future plans for their YouTube channel.

Tell me a little about yourselves?
Antonir: Originally, I am from Israel, and I moved to the United States when I was 9 years old…I graduated from Chapman University Film School back in May.
Assam-Miller: I am from Monterrey Mexico, and I moved to the United States for college when I was 17, almost 18 years old. Currently, I am a senior at Chapman University studying screen acting.

Who is the funnier person between the two of you?
(Awkward pause)
Antonir: We will fight it out and get back to you…Tom is the face of the show.
Assam-Miller: But the one who writes the jokes is Almog.

Why did you guys create this web series?
Antonir: We wanted to highlight awkward situations within the college realm…Tom is a very awkward person so he was born for the role.
Assam-Miller: (laughs)

What is the creative process behind Almost Cool?
Assam-Miller: Well, we would sit down and brainstorm ideas about different stories for “Long Story Short” and “Wiener vs. Brain” and take those ideas and image them to their most exaggerated form. We make multiple drafts and outlines, and shoot the production with our friends. With all the support and help from our friends, we are able to have a two-week turnaround.

Are these stories based on actual incidents, or are they works of complete fiction?
Assam-Miller: Well, sadly we definitely have experienced some of the cinereous, and we try to make them as relatable as possible.

How did you guys come up with the name Almost Cool?
Assam-Miller: Our channel used to be called Long Story Short, but then we realized we wanted to make other content. The name “Almost Cool" describes us people.

Are there going to be any updates with the YouTube channel?
Antonir: We are going to continue “Long Story Short” and “Wiener vs. Brain,” but in the near future, [we’re going to] make content for another YouTube channel in addition to ours… so stay tuned for that announcement.