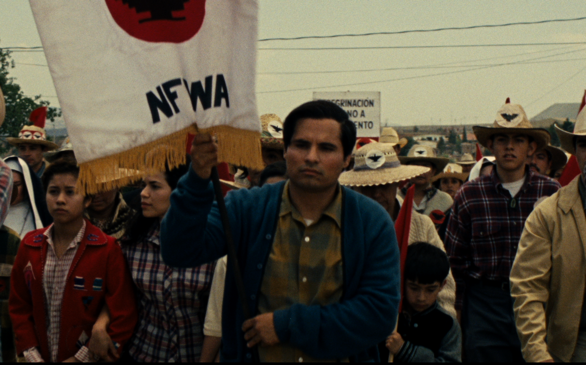 Actor-director Diego Luna’s latest movie, Cesar Chávez, is a fascinating look into the life of an activist. Shot with an intended vintage era vibe and look, the film delves into the life of Cesar Chávez. The dignified civil rights activist moved mountains to gain equal rights for farm workers in the ‘60s and ‘70s.

Chávez was born in Arizona to a landowning family that lost their farm when tough times hit. When he was in the seventh grade, he quit school to become a farm laborer himself. Seeing firsthand that the workers, primarily immigrants from Mexico and the Philippines, were severely mistreated and exploited, Chávez decided there was a need for change. He envisioned a different future for his own family after moving to California and co-founding the National Farm Workers Association. This was the beginning of his fight for equal rights and fair treatment.

The film features the highly underrated Michael Peña as Chávez, who finally has a chance to let his acting chops expand and shine. After seeing him in End of Watch as opposed to another comedy, I knew he had the talent to star in leading male roles; Peña proves to be able to hold his own as this film’s lead.

Malkovich is such a good villain as an owner of one of the main wineries being affected by the grape boycotts. He didn’t play this role as a preconceived caricature of a bad guy. Instead, his portrayal contains subtlety, and he never raises his voice.

Ferrera was also fantastic as Chávez’s wife, Helen. Helen played a pivotal role in the creation of the union with Chávez, and as actors, they had believable chemistry. The Sisterhood of the Traveling Pants star embodied Helen’s firm handed resolve (which was required of her as a leader), but she also has Helen’s softness, portraying a loving wife who just wanted to keep her family safe.

Cesar Chávez starts off a little bit slow and assumes that the audience has knowledge of Chavez’s history. It begins when the activist is in his late 20’s and is ready to start the labor union. There needed to be some more back-story so a viewer coming into the story blind would be able to understand Chávez’s urgency for change. Once the film’s pace picks up, it’s easier to follow along.

With lines like “We need a leader, not a martyr,” Cesar Chávez had such great potential – it just needed a bit more polishing as well as flushing out the beginning more.

However, the film does prove to be informative and inspirational, a great teaching tool for future leaders.