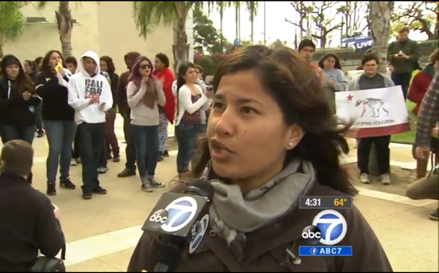 Dozens of students rallied at a meeting of the California State University governing board Wednesday, chanting and hoisting signs that urged the chancellor and trustees to roll back "success fees" that are raising costs on many campuses.

More than 100 students marched in front of the police-guarded entrance of the chancellor's Long Beach office shouting, "We got 99 problems and student debt is one," and "No cuts, no fees, education should be free."

Campuses in San Diego and Fullerton recently joined nine others in enacting the fees to help pay for more classes, faculty hiring, counseling and other services.

The Dominguez Hills campus is considering a $280-per-semester fee that would take effect next fall if approved by a campus advisory committee and Chancellor Timothy P. White.

Many students, however, complain that the success fees are shifting to them more costs for basic educational services that should be included in tuition.

"They say it's for success, but they're placing that success on the backs of students who are already plagued by huge debt," said Sean Washburn, 26, a graduate student studying history at Cal State Fullerton.

He said the Fullerton fee, originally set at $240.50 per semester but reduced to $181, would be an additional burden.

"I'm already $9,000 in debt and face two more semesters with this tuition hike, so that is going to climb," Washburn said. "This is also about future students who won't be able to bear the expense of coming to a CSU."

San Diego State student Janera Montano said she supported her campus' new fee starting out at $50 next fall and increasing to $200 per semester over the next four years.

"I would like to graduate in four years and I feel like if I have to make an investment in my education, I will," Montano, 20, told trustees.

No trustees addressed the students' concerns. In an interview later, White said it was valuable to listen to students with different points of view.

But he said the fees were responsive to the needs of individual campuses in a process that provided input and consultation with students.

Additional advisors and other support, he said, would help to provide students with a higher quality of education, adding, "It's a good example of a policy in place that makes sense."

She will succeed Rollin C. Richmond, who is retiring at the end of the academic year after 12 years as president.

"The university's unique programmatic offerings and beautiful setting draw a diverse group of students who are committed to improving themselves and the community through public service," Rossbacher said in a statement.