UCLA's Season Comes to an End with Loss to Florida 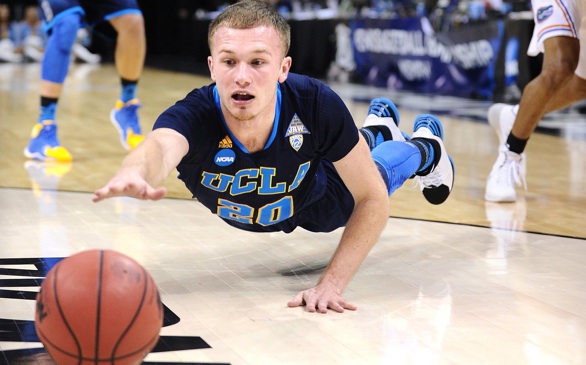 MEMPHIS >> The holes were there.

But the Gators’ defense never really broke, and with a 79-68 win at the FedEx Forum, they ended the Bruins’ season for the fourth time in as many meetings.

This entire week, the Bruins said the history bore little meaning on this Sweet 16 game. Back then, Steve Alford was in Iowa, and then New Mexico. No one on the current roster was on the team back in 2011 except David and Travis Wear, who were redshirting and watched from home. Most weren’t even UCLA fans at that point.

The Bruins (28-9) cut the deficit to one exactly halfway through the second half with a 7-0 run, but went scoreless for nearly five minutes — flustered by the Gators’ press. UCLA shot just 42 percent, and finished with fewer than 70 points for just the second time in 15 games.

“It just got too far out of reach,” forward Travis Wear said.

Added Powell: “They were just a better team today.”

Florida (35-2) soon ran the lead back up to double digits, capping the game with a pair of thunderous Casey Prather dunks in the final 73 seconds. It sealed its fourth straight Elite Eight berth, and will play No. 11-seed Dayton on Saturday night for a spot in the Final Four. It has now won 29 straight games.

Less than a week ago, UCLA committed a season-low three turnovers against Stephen F. Austin in a round-of-32 victory. Against the Gators, the Bruins already had seven by halftime. They had three assists.

Bigger concerns lay on the glass. UCLA didn’t have an offensive rebound until Powell grabbed with with only 2:02 left in the first half. Thirty seconds later, Florida freshman Chris Walker rebounded his own missed free throw, scoring an open layup for a 36-30 lead.

At the break, the Gators already had seven offensive rebounds.

“They were probably the best offensive rebounding team that we’ve faced,” Wear said. “It seems like they’ve got five guys. There’s guards in there, there’s bigs in there. They’re big and physical, too, so it’s tough to block out guys like that.”

One of those boards kept alive a streak of five possessions with a made 3-pointer, a blistering stretch for a team that was good-not-great from long range.

Three of came from sophomore Michael Frazier II, who entered the game responsible for over a third of Florida’s 665 attempts from beyond the arc. He quickly drained two more in the second half, part of a Gator run of six straight made field goals.

Frazier finished with a game-high 19 points. Point guard Scottie Wilbekin followed with 13, while Prather had 12.

Next year, he may be the most likely of UCLA’s stars to return. Anderson’s father has said for weeks that the sophomore point guard is a lock to go pro, and freshman guard Zach LaVine will likely follow despite recent struggles.

If Adams does stay, he will return to a team that is clearly progressing. A year ago, the Bruins lasted just one game in the NCAA Tournament, blown out by Minnesota in an 83-63 harbinger of Ben Howland’s imminent firing.

In his first year, Alford turned an inconsistent team into one that rolled through its conference tournament. This ending may have hurt even more, but there’s hope looming.

“The further you go, the harder it is to handle a loss,” Wear said. “(But) this team that we had this year is tremendous. I couldn’t have asked for a better coaching staff to end my career.”