'I Went Online to Find a Sugar Daddy...': One writer tries to figure out what these men want. 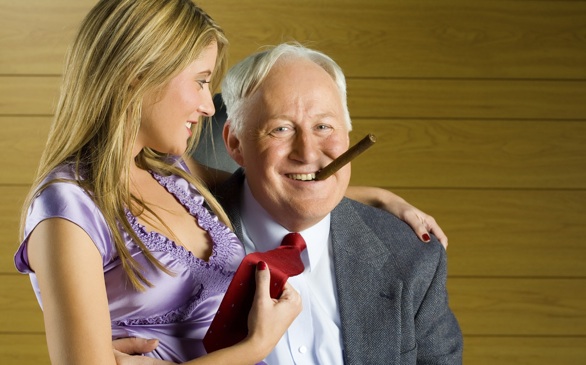 Finding a Sugar Daddy is not uncommon for many college females.
(Credit: istockphoto.com)

*Names have been changed to protect users' identities.

It has been two days since I have created my Seeking Arrangement online profile, and already I have messages from many men of varying ages and ethnicities. I don’t want to toot my own horn, but it is a self-esteem booster. I mean, who doesn’t want to feel adored and wanted?

A “Sugar Daddy” is often described as a “successful and generous man who is willing to pamper and offer financial help or gifts to a young person in return for friendship and companionship,” and a “Sugar Baby” is an attractive, ambitious and goal oriented individual who has a lot to offer. At least, that’s how Seeking Arrangement describes the terms.

Many college girls are “Sugar Babies” and are only supposedly going on dates with their “Sugar Daddys” in exchange for money, much of which they use to pay for college costs – tuition, bills, books, etc.

It may not seem as if this is safe or the best way to get out of college debt, but it is an ongoing trend within the college community. Thus, I decided to see what the hype was about, so I made a Seeking Arrangement account.

I went undercover to truly dig up how these “Sugar Daddys” operate, and what I found was...interesting, to say the least.

Richard, a 54-year-old married man with three children, contacted me on my very first day. His profile stated he was looking for an ongoing monthly arrangement to help a sugar baby "enjoy your life." He wanted the relationship to be discreet, and he was not interested in controlling a young woman or being intrusive -- instead, he wanted to play it safe.

This sounded off the alarms in my head. First of all: he is married and has children! Secondly, what does he mean by “playing safe?”

After five short messages, he asked me out on a date in order for us to get to know one another more.

I was more than hesitant. For all I knew, this guy could be a rapist or a kidnapper, and I wasn’t about to take my chances. I told him that before I agree to meet with him, I needed to ask him a few questions first…

Me: Have you ever had a sugar baby? If you have, how much did you pay her?
Richard: I had an arrangement before that was wonderful it went on for two
years, and we were good friends as well. It remained secret and discreet and ended when she graduated from college and met someone she wanted to live with. It was time. We remain in touch. She enjoyed our time together and her monthly support enabled her to relax and focus on college and socializing with her peers. She received 3-4 thousand a month support. Plus shopping sometimes as well.

Me: Will you be expecting sex with this arrangement? I just want to know what you did with your old sugar baby?
Richard: Sex was something we both enjoyed and a big part of our arrangement. It's pretty much like having a secret girlfriend. But we had our personal lives, which never interfered. We had good chemistry. Do you not like sex?

After that, there was no response.

Instantly, I realized this site was not just about meeting up with a “Sugar Daddy” and talking; these men are expecting more than that if they’re willing to dish out all that dough.

Twenty-four-year-old Steven totally caught me off guard when I received his message. He is in the marketing industry and works from home. Being self-employed, he wanted the company of a woman without all the strings attached. His profile also stated he was not looking for a serious relationship.

I always thought these types of websites were only for older men wanting to have a fling with a younger girl, but I was completely wrong. Steven seemed to be using this site to find himself a “Sugar Baby” that he was willing to pay to just see him.

After our second day of talking on the Seeking Arrangement site, he emailed me his phone number, and we started texting. In order to feel safe and secure, I downloaded a "text free app” on my phone that gave me a different number so I could contact him.

I started asking questions about his experience with the site, but his responses weren’t in depth. In fact, they were very vague.

We exchanged a couple of messages, and then he asked for pictures of me. I responded with: “I’ll send you a picture, if you send me one first.”

Truthfully, I was never going to send this guy one of my many selfies, because that’s just weird, and I did not want my face to end up all over the Internet. I just wanted to see if Steven was willing to send a picture of himself to a complete stranger.

I waited for two days, but he never responded back.

I analyzed our conversation, and I suspect that Steven wasn’t who he said he was. I mean, a 24-year-old who is willing to pay money just to talk to young women seems kind of bizarre. College guys do that on a regular basis without paying the $150 fee just to be a “Sugar Daddy” on a site. Perhaps Steven was trying to catfish me?

--
This whole experience has made my stomach uneasy. I know a lot of college students have “Sugar Daddys,” but it is not something I ever see myself interested in.

Responding to all those messages that first night made me feel kind of dirty. Never in my life have I intentionally led someone on, and I have never spoken to more than one guy at a time.

Yeah, I do have college debt, and I am cautious of my spending. However, I can honestly say that I will never do these arrangements if the going gets tough.

I am in no way judging girls who have done this or are doing this to get through their college careers. All I am trying to say is: how is having a Sugar Daddy/Sugar Mama/Sugar Baby not a form of prostitution when sex is involved…?

Find out about the UNUSUAL WAYS COLLEGE GIRLS CAN MAKE MORE MONEY!