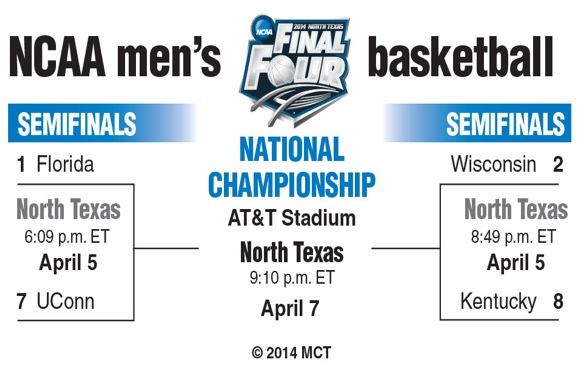 To North Texas comes the spoils from two of the most drama-filled weeks in NCAA Tournament memory.

Kentucky, Florida, Connecticut and Wisconsin. A Final Four that has won a combined 13 championships — including two of the last three and five of the last 10.

A day after Florida and Wisconsin advanced to Saturday’s Final Four semifinals at AT&T Stadium, Kentucky and UConn joined them Sunday by winning region final thrillers, in the process clinching several Texas homecomings.

Dallas native Julius Randle, who starred at Plano Prestonwood, scored 16 points and pulled down 11 rebounds in Kentucky’s 75-72 victory over Michigan in the Midwest Region final in Indianapolis.

“When he made that shot, I mean, it was just ridiculous,” said Randle, whose Wildcats (28-10) face Wisconsin (30-7) in Saturday’s second semifinal. “In that stage, that atmosphere, that game, to make that shot to send us to the Final Four, it was just amazing.

“And I was just proud of him, and it was shocking at the same time because it was such a tough shot.”

There have been numerous tough shots and shockers during this tournament, which began March 18 and will conclude with next Monday night’s championship game at AT&T Stadium.

This is the second time North Texas has hosted a Final Four. The other time was 1986, with Duke, Kansas, Louisville and LSU coming to Reunion Arena and Louisville emerging as champion.

If the first 64 games of this year’s tournament are a harbinger, North Texas is in for quite a Final Four as March Madness spills into April. There have been a record-tying seven overtime games. Nearly one-third of the games — 21 — have been decided by five points or fewer.

Fourteen games have been decided by three points or less, including 11 by one or two points. To the surprise of many, the highly regarded Big 12 and Atlantic Coast Conferences are shut out of the Final Four — while the Southeastern Conference is sending Florida and Kentucky, the Big Ten is sending Wisconsin and the American Athletic Conference is sending Connecticut.

Among UConn’s eight losses this season were two to AAC member SMU, which wasn’t invited to the NCAA Tournament — but will play in the National Invitation Tournament semifinals Monday at Madison Square Garden.

But like the other members of the final quartet, Connecticut comes to Arlington on a roll, although not as lengthy a one as the Florida team it faces Saturday.

Florida (36-2) entered as the tournament’s No. 1 overall seed and has won 30 straight games. It so happens that the Gators now face the last team to beat them.

That 65-64 UConn victory occurred Dec. 2 in Storrs, Conn. And would you believe it? Florida’s other loss this season was at Wisconsin [59-53 on Nov. 12], a team the Gators could meet in the championship game.

The two defeats happened long ago to a Florida team that beat Kentucky three times en route to going 18-0 during the SEC regular season and 3-0 in the league tournament.

The SEC tournament title victory over Kentucky, though, was a 61-60 squeaker. Winning four NCAA Tournament games to this point brought a sense of relief to the Gators, who had lost in the Elite Eight the last three years — including a year ago to Michigan at AT&T Stadium.

“It’s a great thrill,” said Florida coach Billy Donovan, who is back in the Final Four for the fourth time. The Gators also made it in 2000, 2006 and 2007, winning the championship the latter two times. “This is what the tournament is all about; you get a chance to go to a Final Four. It's a spectacle, a great sporting event.”

Long before anyone knew which teams were coming, NCAA and AT&T Stadium officials roughly projected a semifinal Saturday crowd of 80,000, which would break the record of 75,421 at Houston’s Reliant Stadium in 2011.

Now North Texas is getting a tradition-steeped Kentucky program that has won eight titles and is appearing in its 16 Final Four. This will be the fifth Final Four for Florida and UConn and the second for Wisconsin.

‘We've all played basketball our whole lives, and we've all dreamed of going to the Final Four,” Wisconsin junior center Frank Kaminsky said. “To actually accomplish that is something I can't put into words, but we all know we still have a lot of basketball left.

“We're going to enjoy this now, but this is business. We want a national championship now. We have made it to the opportunity to get there, so why not go get it?”

Distances between the Final Four schools' towns and Arlington:

Mobile and tablet users, click here to view the graphic.