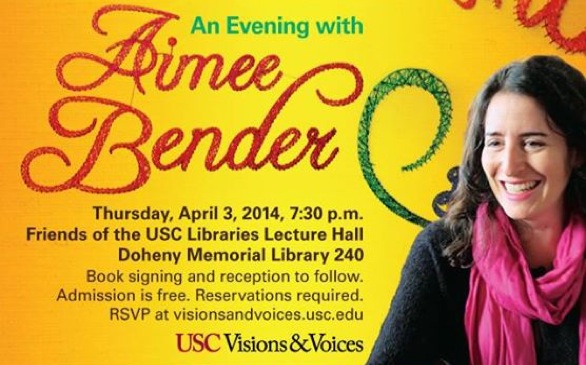 On the evening of April 3, “Provost's Writer Series” will be featuring the talents of USC's own Aimee Bender, a best-selling author and English professor.

Hosted by Provost Elizabeth Garrett, this series provides an opportunity for USC faculty to read from and discuss their work, sharing it with the student body and general community.

Those in attendance will be given the chance to engage the writers in meaningful discussions regarding their work.

This particular evening will feature readings from Bender's publications, as well as a conversation between the writer herself and Brighde Mullins, the director of the Master of Professional Writing Program at USC.

Bender's works have been described as "modern fairy tales," telling the stories of contemporary life from original, intriguing angles. Some of her most successful novels include the selling-novel The Particular Sadness of Lemon Cake and the New York Times "Notable Book," The Girl in the Flammable Skirt. Her latest book is a collection of short stories titled The Color Master.

The author has also published several works of short fiction as well, appearing in publications such as Granta, Harper's, The Paris Review and Tin House.

With a reception and book signing to follow, this is one literary event on campus that you won't want to miss.

The event will begin promptly at 7:30 p.m. Admission is free, however, RSVP is required.

For more information and to RSVP for the event, click here.