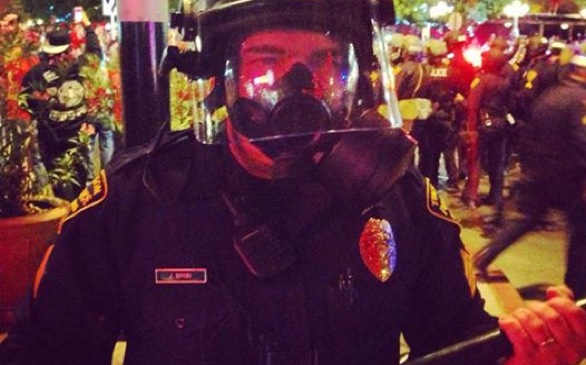 Andrew Brown: 'This is the cop who shoved that girl in the video...'
(Credit: Facebook.com/aemerybrown)

The Tucson Police Department is investigating three citizen complaints regarding officers’ use of force in trying to disperse a large crowd that gathered on University Boulevard after the Arizona Wildcats’ loss in the NCAA basketball tournament Saturday night.

One of the complaints involves an incident caught on a cellphone video of a woman who appears to be walking west on a sidewalk on University Boulevard when she is knocked down by an officer and pushed over a bench.

“These girls had been trying to get to their car. The girl is on her phone not paying attention and this cop came out of nowhere and just leveled her,” said Phoebe Landolt, who shot the video. “After that everyone just started yelling and she started crying.”

The officer in the video is a police sergeant who has been with the department for 16 years. He was interviewed by internal affairs Monday, Police Chief Roberto Villaseñor said.

The department is gathering video taken by officer-worn cameras and interviewing witnesses and the woman about the incident to determine what kind of threat the woman posed and if the amount of force used was justified for what she was doing, Villaseñor said.

“Then we’ll make our decision based on the totality of the situation, not just the 15-, 20-second video clip that’s been shown nationwide. Because obviously you look at that and it’s easy to jump to conclusions, but there could be a lot of background information that needs to be considered before you make that decision,” he said.

Villaseñor said Monday afternoon that he had no information to share about what led up to the incident. The video has been shared through social media sites and posted to numerous websites.

Attempts to contact the woman shown in the video were unsuccessful.

Another witness, Andrew Brown, said he was walking near the woman when she was pushed down.

“I just felt like it was a really aggressive use of force,” Brown said. “It was one of the most aggressive things I’ve seen in person in a long time, and from my own experience I don’t feel like the girl posed any threat to the officer and there was no verbal communication before the incident.”

Brown said police were clearing University Boulevard and were moving the crowd west. He said police did not communicate to people in the stores in the cleared-out area about what they should do or where they should go.

After the game ended, people began pouring out of bars and restaurants and congregating in the street.

The atmosphere soured after someone threw a smoke bomb at a Sun Link stop, Villaseñor said.

“Up until then people coming out, they were starting to leave the area, things were still good, people were taking pictures with ... motorcycle cops, cops on the street,” he said. “Then all of a sudden the mood with the crowd turned once those smoke bombs were let off, and we know enough about crowd dynamics that you don’t want to let a crowd just linger and build on its own energy.”

Villaseñor said police wanted to avoid serious riots that happened after UA basketball tournament games in 1997 and 2001 by trying to keep people moving.

He said the department was criticized both for not having enough of a presence after Thursday’s Sweet Sixteen game and criticized for being too aggressive Saturday.

“It’s really a no-win situation for the police,” he said. But the individuals involved have to bear responsibility for their actions, Villaseñor said.

Police said Sunday that 15 people, including nine UA students, were arrested during the incident. They are facing misdemeanor charges of unlawful assembly, resisting arrest and disorderly conduct.