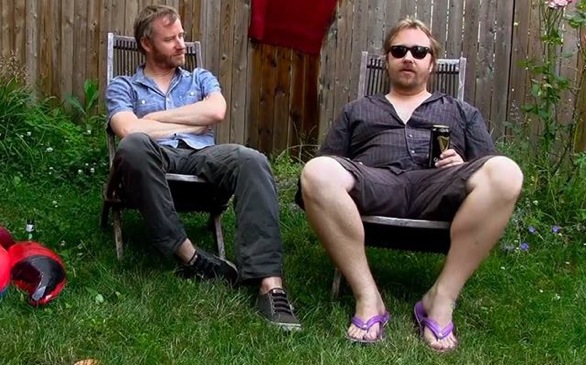 There are few careers more coveted than that of a rockstar. The babes, the fame, the drugs—everything is at your fingertips. When you’re center stage, with the spotlight always following you, you’re in control and everyone praises you for it.

But how are you supposed to feel when that person isn’t you, but your brother?

Always in the shadows of offstage life, you can only watch as the focus illuminates everything but you. You love him, you really do, but somewhere along the way you realize you’ve become a supporting character in your own life. It’s time to take it back.

Tom Berninger’s documentary Mistaken for Strangers captures the messy events of what happens when Tom goes on tour with his older brother Matt, lead singer of the indie rock darling The National. Invited to be a roadie and to help out with the tour’s production, Tom reinvents the occasion by taking it upon himself to film the tour and document what The National is all about.

Consisting of two pairs of brothers, plus Matt, The National is a tight-knit group that has its own familial problems. Tom’s introduction as the somewhat burnout of the Berninger clan becomes the wrench that’s thrown into the fragile state of band life.

Not only is he a “metal head” with little to no interest in the “pretentiousness” of the indie rock world, he’s also never made a documentary or any film other than “B” horror films. Even more, Tom and his idol of a brother are not close and never have been. Matt reached out to him as a favor; Tom received it as an opportunity to take advantage of.

As the tour goes on, it becomes increasingly clear that Tom has no interest in his job responsibilities. Instead of providing towels, getting water or making sure guest lists make it to the front of the house, Tom would rather stick his camera in the band’s face only to ask the most trivial questions and make a fool out of himself. Matt tries to hold it together for his brother’s sake, giving him the benefit of the doubt, but when he starts making big mistakes (i.e. getting drunk on the job and embarrassing the band), the rockstar must put his brother in check.

Tom’s film sets out to be a rock doc, but ends up being a glorified home video when he includes interviews of their mom and dad talking about their sons’ respective talents.

While there are moments of tender contemplation of their relationship, as well as genuine love felt between the two, Tom and Matt may be better off talking things over behind closed doors. It’s supposed to be a personal look into the complexity of brotherhood, but Mistaken for Strangers becomes a family therapy session – and not one that seems worth being a part of.

Even diehard The National fans will find little to please them, seeing as all of the musical segues are of poor sound and visual quality. There are moments that spark Matt’s dark side, pulling us into rockstardom’s less glamorous sides, but they are quickly upended when Tom changes the subject all too hastily.

In the end, Tom appears to be the opposite of King Midas: he’s able to turn everything he touches into crap. It may be a little bit fun to see him get wasted as he talks to Annie Clark of St. Vincent or see the tour bus travelling an hour before realizing they left him behind, but ultimately, it’s not enough to make the Berninger brothers’ adventures come from somewhere of true emotional depth.