For Matt Kemp's Latest Comeback, There's No Place Like Home 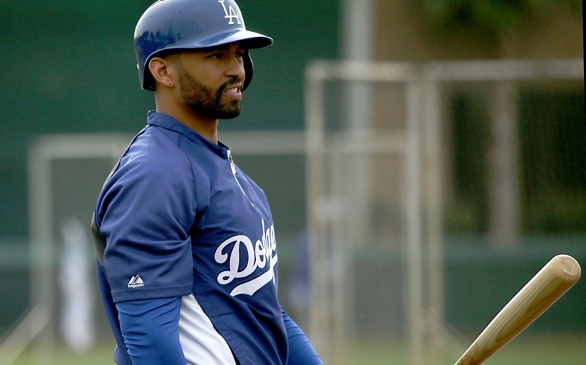 Matt Kemp is expected to make his long-awaited return from the disabled list Friday, which also happens to be the day of the Dodgers' home opener.

The timing is entirely coincidental. But from Kemp's perspective, it's absolutely perfect.

"Opening day at Dodger Stadium is always a sight to see," Kemp said. "It's always sold out, there's always some type of excitement, 56,000 screaming Dodger fans, man. What a better way to come back than to come back for the home opener?"

"That's the main thing, getting out there and competing, that rush," he said. "When you're on a baseball field, man, there's really nothing that can bother you. That's my happy place."

Provided the Dodgers activate him as Manager Don Mattingly anticipates they will, Kemp could be playing in the team's sixth game of the season. But Kemp has waited much longer than five games to play in the major leagues again.

His injury-plagued 2013 season came to an abrupt end in late September. A major weight-bearing bone in his left ankle was discovered to be swollen, a remnant of an unnecessary home-plate collision two months earlier. Informed by doctors that the bone could break if he continued playing, Kemp spent the playoffs on crutches.

Kemp later underwent operations on his shoulder and his ankle.

He couldn't run over the winter or the early stages of spring training. While his teammates ran on the practice fields of the Dodgers' spring-training facility, Kemp stood off to the side. While they played in exhibition games, he took at-bats on the minor-league side of the complex.

"It's been a long, long road," he said. "Lot of rehabbing and lot of grinding, just trying to get back to where I need to be."

Kemp remained in Arizona to play in minor-league games while the Dodgers were in Australia.

Kemp traveled with the Dodgers to San Diego for their series against the Padres. One day, he faced Josh Beckett in a simulated game. On another, he ran the bases at full speed.

Asked if Kemp could benefit from a minor-league rehabilitation assignment, Mattingly replied, "To be honest with you, I don't know what that does for him at this point. He's had all kinds of at-bats. He's probably had as many at-bats as any of our guys. At some point, you just have to start. You can't wait until he's hot in the minor leagues to say he's ready."

When Mattingly met with Kemp earlier this week, he told the center fielder he didn't want him to return until he felt comfortable doing everything he would normally do.

"I want him to feel like he can go and steal a bag, stop on a dime after a hard turn coming around third or coming around first, that he's ready to play baseball," Mattingly said. "He thinks he is."

Kemp acknowledged he didn't feel that way when he started playing in minor-league games in Arizona.

"My biggest obstacle was probably sliding," he said.

After his third time sliding in a game, Kemp said, "I didn't feel anything. After that, I was like, 'I'm good.'"

Mattingly said the Dodgers would have to be patient with Kemp and couldn't expect him to immediately start hitting the way he used to. The Dodgers have three other capable outfielders in Yasiel Puig, Carl Crawford and Andre Ethier, but Mattingly said he will play Kemp regularly even if he doesn't produce right away.

Kemp has no such concerns. Unlike the winter before last season, when he was recovering from a major shoulder operation, he was able to lift weights this off-season. He said he is stronger than he was last year and that the range of motion of his shoulder has improved.

Kemp admitted he will be nervous.

"That's normal," he said. "If anybody says they're never nervous before a game, then something's not right. For me, it's just getting out there, slowing the game down and not getting too hyped. When you've been hurt for a while, you tend to want to go out there and try to do too much."

While Mattingly said he wants to give Kemp occasional days off, Kemp continues to insist he wants to play every day.

Looking around at his teammates in the clubhouse this week, Kemp smiled.

"To be honest with you, it's not fun sitting here watching these guys play," he said. "I love these guys, but I'd rather be out there playing with them. I'm tired of being a cheerleader. I want to help these guys win some games."