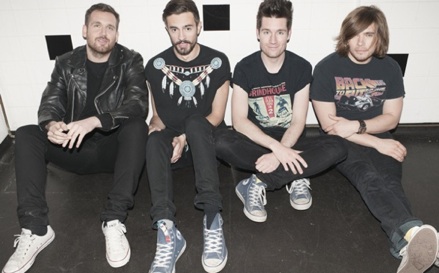 There are many big name bands performing at Coachella this year: Lana Del Rey, Lorde, Outkast, etc. But also this year, many under-the-radar bands (with a few of them from other countries) will be putting on great shows you don’t want to miss!

Here is a list of artists to check out for all of you lucky souls who have managed to obtain tickets:

1.City & Colour: Saturday, April 12 & 19
Dallas Green, a one-man band, will be taking the stage this year. There is no doubt he will be singing his most famous song, “The Girl,” which he originally released on Myspace. Now, this 6-minute song is his most purchased single on iTunes. Other songs of his I recommend are “Comin’ Home” and “We Found Each Other in the Dark.” City & Colour is more mellow and slow, which means his set will be a nice break from all the raving you will be doing during Calvin Harris’ performance. Definitely stop by, and check out Green’s powerhouse vocals and sweet lyrics such as, “You don't ask for no diamond rings no delicate string of pearls/that’s why I wrote this song to sing/my beautiful girl."

2.  Bastille: Friday, April 11 & 18
This up-and-coming band has surely made a name for itself with its hit song, “Pompeii.” If you think you haven’t heard it, trust me, you have. This past summer, radio stations everywhere were playing it nonstop: “But if you close your eyes/Does it almost feel like/Nothing changed at all?” What listeners fail to understand is that “Pompeii” isn’t Bastille’s only song; the band has many more awesome tracks for you to listen! My recommendation for song purchases before attending Coachella are “Flaws,” “Oblivion” and “Laura Palmer.” Believe me when I say you will be anticipating this band’s next album as soon as you’re done listening to its first, Bad Blood.

3. The 1975: Sunday, April 13 & 20
With only one full album and three EPs, you might consider missing The 1975’s set at Coachella, but I highly suggest you don’t. This band hasn’t been around for a long time, but its music is phenomenal. Radio hit “Chocolate” can make anyone sing along with lyrics like, “We're never gonna quit it, no, we're never gonna quit it, no/Yeah, we're dressed in black from head to toe/we’ve got guns hidden under our petticoats.” The 1975’s self-titled album is amazing, but the standout tracks you have to check out are “The City,” “Girls” and “She Way Out.” The band’s sound is unique, with lyrics and vocals that blend together fantastically—there is no reason you should pass up seeing these guys perform live.

4. Daughter: Sunday, April 13 & 20
“And if you're still breathing, you're the lucky ones/'Cause most of us are heaving through corrupted lungs.” These lyrics come from Daughter’s hauntingly beautiful song, “Youth.” Daughter is a European band and although it has been around for a couple of years, this band has not entered mainstream music yet…which is a shame. As an amazing alternative-rock band, Daughter rivals the big headliners out there in both content and style. The band’s lyrics are moving and inspiring, and will most likely have you rethinking your life problems. Similar to City & Colour, Daughter might be considered as the “odd band out” within the Coachella lineup, but don’t let that fool you; this band is awesome. Expect the three-piece to perform “Youth,” “Medicine” and its newest track, “If You Leave.” This female-fronted band tours mostly in the U.K., so catch this rare performance in the United States at Coachella.

5. Empire of the Sun: Saturday, April 12 & 19
Empire of the Sun is known for tracks such as “We are the People” and “Walking on a Dream.” This band is totally overlooked even though it has been around since 2008. It’s completely crazy how six years later the radio is now only beginning to play its music. Finally, we get to hear fun lyrics like, “We are always running for the thrill of it thrill of it/Always pushing up the hill searching for the thrill of it.” Empire of the Sun has more music than just these two tracks, however; “Romance to Me,” “Without You” and “Standing on the Shore” are all from its 2009 Walking on a Dream’s special edition album. This band’s music is extremely catchy and will have you jamming out!

6. MGMT: Saturday, April 12 & 19
MGMT is yet another band that is known for a couple of songs but has some listeners that haven’t really dived into the its pool of musical genius yet. “Kids” and “Electric Feel” (“I said ooh girl/Shock me like an electric eel/Baby girl/you turn me on with your electric feel”) are awesome songs, yes, but MGMT has many more, including “The Youth” and “Time to Pretend.” Both are very lovely and will have you singing along as well. The bottom line is this: MGMT’s music is truly captivating and will udoubtedly keep you mesmerized at Coachella.