A Haunted House 2's Marlon Wayans Compares Comedy to Sex: 'You have to flirt with the audience before you f*ck ‘em…' 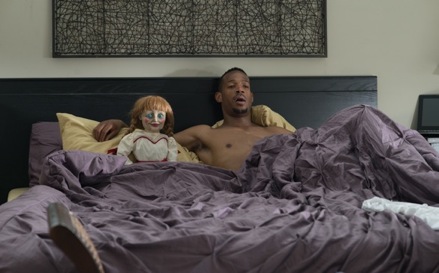 Abigail (the doll) and Marlon Wayans as Malcolm in A Haunted House 2, opening April 18, 2014.
(Credit: Will McGarry)

A Haunted House 2, the sequel to 2013’s A Haunted House, returns to spoof more of Hollywood’s current supernatural thrillers, like the Paranormal Activity franchise and The Conjuring.

Starring Marlon Wayans, Essence Atkins, Dave Sheridan, Affion Crockett and Cedric the Entertainer, who all reprise their roles from the first film, this sequel begins immediately where A Haunted House left off.

Wayans, who also co-wrote the film, is never at a loss for words. In a one-on-one interview with Campus Circle, he shared his thoughts on comedy as well as his stories growing up in New York City. Like many popular entertainers, he used his modest upbringing as fuel to succeed.

Your family grew up in the projects and not only were you able to survive, you were able to thrive. What made your family different from so many families in your neighborhood?
We never really indulged ourselves in the lifestyle of the projects. We never got into much trouble because we were too busy being the commentary to the projects. We always figured out what was funny about the situation we were in instead of being a part of the situation. We wanted to find the jokes. We didn’t want to be in jail. We wanted to make jokes about the person who was going to jail. We wanted to make fun of the loser of the fight who looked crazy. Our thing was always about the joke. That kept us out of trouble…That was our remedy. It eventually became a way out. Some people become athletes, but we have flat feet, so our way out was through the jokes.

While you’re mostly known for your comedy, you’ve also performed in dramas like Requiem for a Dream and action movies like G.I. Joe. How does your preparation differ for different types of roles?
You really dive into the subtext of dramas. When you’re doing an action movie, it’s really physically draining, and you’re more worried about doing ‘less is more.’ Depending on the scene, you have to learn to fight and shoot guns.

When you do a comedy, I still train like I’m doing an action movie. I still look at subtext like I do with dramas, but I’m always thinking about what’s funnier than just what’s on the page. I believe comedies are harder to do. I have to be funny; I have to be ‘on.’ I have to perform. I have to improvise. I have to be on my toes. I have to be able to help somebody else with [his or her] line. Comedy’s harder, and you don’t get enough credit for it.

Why do you think it’s harder for comedies to receive critical or award recognition than dramas?
It’s easy to cry. It’s harder to cry from laughing, and I don’t think it’s appreciated... People like to detoxify from crying. I think people can get caught up in feeling sad or feeling remorse or feeling guilt or just feeling something besides being happy. Being happy – we don’t give it enough credence. We don’t give it enough appreciation. As people and as society, we’re always looking at the bad. Hopefully, one day, they’ll do funny news.

Comedy is very subjective, though. One thing might be funny to a room full of person, but it may not be funny to that one person [in the room]. There are some things that people think they’re above laughing at, like scatological humor. It might be hard for someone who went to Harvard for instance, to laugh at a fart joke. I learned at a young age that I can’t expect everyone to embrace me. I just have to do what I do.

“In Living Color” had quite a bit of risqué cultural/racial humor, as does A Haunted House 2. Is this a societal button you are consciously trying to push?
Not many people are doing that nowadays. Dave Chappelle did it. Someone has to call attention to it, and I’ll be that guy. That’s okay. It’s honest to who I am. I grew up in the projects of New York City, and I find light in dark places. It’s just what I do. I don’t cry about it; I try to write jokes about it to make [people] cry from laughing about it.

How has your stand-up influenced your writing or vice versa?
I’ve been doing stand-up for a few years, and I’ve seen my most progression as a writer...I feel like I’ve been getting better. I look at my work, and I’m paying more attention to story. I’m not forcing something. I focus more on character. I look at comedy from more of a cerebral point of view than just from a physical standpoint. The thought of the joke has to make me laugh, and then I go, ‘How do we physically go about doing that?’

I’ve learned there are different kinds of laughs. [Stand-up] teaches me to listen more. It’s not like every joke will get a huge [roar of laughter], nor should they. You have to let it play. It’s like in music when you modulate your punches. Learn how to build up to the big moment. Every five or 10 minutes, I want there to be a big POW! In a good comedy, if you laugh uproariously every 10 minutes, then that means you snickered along the way until you got to that big laugh. It’s like you’ve got to flirt with [the audience] before you f*ck ‘em; you have to have good sex before you get engaged. It might sound crazy, but in a movie, I’ve learned to try to listen to the audience in my head, whereas before I was guessing.