To Camp or Not to Camp?: The great Coachella question. 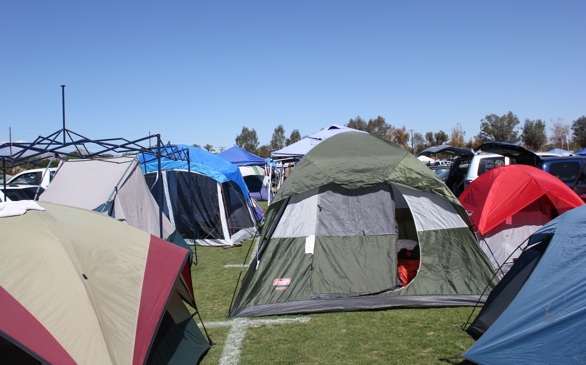 Most camping spots are sold out, but check out Coachella.com to see what’s available.
(Credit: Kendall Robertson)

As Coachella gets closer, the finalization of plans is becoming more real. For some, the question of whether to camp or get a hotel room still lingers.

Here’s a list of pros and cons to help break down the decision for you.

1. Ability to Come Back
During the performances, you can come back to your tent and grab a snack if you need it. Or a nap. Or libations. Anything you need is relatively close.

2. Communal Atmosphere
There are some interesting people at Coachella, so by camping you can actually meet them. The lines for the bathroom can be a great place to strike up a conversation.

3. Not Losing Your Friends
Sometimes your friends have bad taste in music. Sometimes you guys don’t want to go to the same show. If you all have to leave at the same time, you have to stay together (or pray your phone doesn’t die). Camping allows you to use the tent as a home base to meet up again after separating.

1. The Shower Situation
You probably won’t shower as much as you do in your everyday life (the only way to do it is by showering at night—it will be far less crowded then), but the fact is that most other people at the festival will be in the same grimy boat.

2. Less Actual Sleep
Yeah, don’t expect to sleep well. Once the sun rises, your tent will turn into a greenhouse. Everyone wakes up (and they're pretty sweaty) to start the party early.

1. Actually Sleeping
In a hotel, the glaring sun or a person already drunk at 7 a.m. probably won’t wake you up. You can have a relaxing morning and make the commitment to enter the polo fields a little later.

2. Better Amenities
Tents lack that basic amenities hotels obviously have. A tent just doesn’t have the comforts many crave.

1. Getting There
The festival has free parking, which requires someone being willing to drive (that DD thing is so necessary), or you can take a cab from your hotel. The cab situation is dicey and frustrating with so many people trying to leave at once. Cabbies hike up their prices absurdly as well, so make sure to factor that into your Coachella budget.

2. Getting There Late
When you’re coming from a hotel, it’s hard to get yourself up and ready to go in time. The temptation to stay at the pool is so strong, and you know you have a long day and night ahead of you. However, a lot of great bands play in the daytime, sometimes the ones you’ll be proud to see before they get “big.”