Students Admit to Using Drugs to Combat College's Pressures: Typical “party drugs” are still common, but 3 other drugs are all the rage. 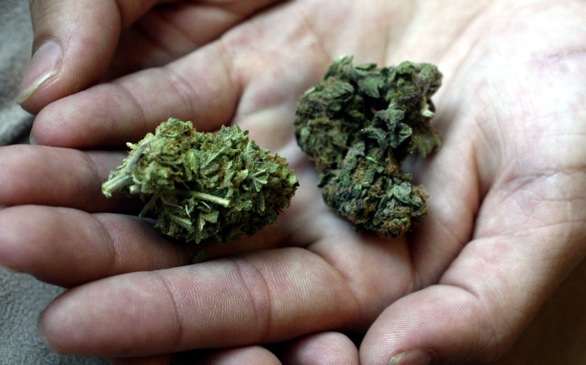 Marijuana is just one of the three drugs students are using for non-party purposes.
(Credit: JAVIER MANZANO/ORANGE COUNTY REGISTER/MCT)

Cramming for tests, medicating headaches and living with frustration over grades are all a part of the college experience. Students tend to deal with these problems in all sorts of ways: some read, others hike or workout, and some like to go to the beach to take their mind off all of it.

However, others are taking a rather unconventional route to relieve the pressure and stress that come with college: they’re using drugs, including recreational, prescription and illegal substances.

On top of using drugs to party at social events, students use them to help them deal with school. A few students I talked to have admitted to turning to substances such as speed and Adderall to stay awake and study harder, as well as marijuana to relax and unwind.

Speed: An Effective "Study Drug?”
According to the National Institute on Drug Abuse NIDA, speed is a nickname for methamphetamine  – an extremely addictive stimulant drug that is similar in structure to amphetamine.

One of the side effects users experience when taking speed is “increased wakefulness,” making this a drug some college students reach for when they want to stay awake to study for an exam, for example. They also feel euphoria as dopamine – the ‘feel-good’ chemical – levels increase in the brain.

According to Eric, the drug can vary in prices, depending on where you get it. He paid $65 per gram.

As to where students get their hands on speed, Eric did not want disclose that information since it is an illegal drug.

However, he did say that although speed comes in a variety of different forms – such as pills or powder – he took it in the form of a pink pill that he crushed and placed in a pipe. He had to take four or five hits to really feel it.

“It made me happy, bubbly and excited,” he said. “It was an adrenaline rush to my whole body and mind.”

Even though Eric felt great at that moment, the next morning he felt completely different as he experienced some of the drug’s adverse side effects.

“I regretted it. It messed me up because I wasn’t my full self. I burned my tongue, so I couldn’t talk. I had to constantly chew gum, which in turn left my jaw sore. And so, I couldn’t even eat anything for about three days,” he said.

As uncomfortable as those side effects sound, Eric could have experienced even worse symptoms. The NIDA states that people who use methamphetamine long-term may experience anxiety, confusion, insomnia, mood disturbances and more.

So, why would a student take speed when the side effects risks are so great?

“I wanted to see if I could use it for academic purposes,” said Eric. He also explained that some of his reasoning came from curiosity: “I took it just to see how it was and to see what it would do to me. I wanted to feel how it was to be on speed.”

In the end, speed proved to be useless for him. “It interfered with everything,” he said. “If anything, it made my classes harder. It affected my work and my everyday life.”

Does Adderall Really Work?
Adderall, the drug doctors prescribe patients with ADD and ADHD so they can treat their hyperactivity and inability to pay attention, is widely known on college campuses. Some claim that if you haven’t studied for a big test or midterm, taking Adderall the night before will help you stay awake, study harder, remember everything that you learned and viola -- you earn a passing grade.

The NIDA explains Adderall contains amphetamine and, like speed, promotes wakefulness. It also increases a person’s focus and attention.

However, is the widespread belief that Adderall improves a person’s ability to learn actually true? Well, it depends on whom you ask: according to scientists and doctors, no—but according to some students, yes.

The NIDA states studies and research have shown stimulant drugs like Adderall do not enhance learning or one’s thinking ability when taken by someone who does not have ADHD. In fact, “students who abuse prescription stimulants, actually have lower GPAs in high school and college than those who don’t.”

Still, there are some college students who think otherwise. *Victoria, a graduating CSUN senior, said that she has taken Adderall throughout her college career in order to pass her classes.

A friend gave Victoria the drug for free the first time she took it. But as she became a regular user, she started paying $7 per pill. Victoria said she takes 20 mg regularly, but when she is short on cash, she takes a 15 mg pill and cuts it into three parts, so it lasts longer.

Victoria claims Adderall helps her focus and concentrate. “I take it and then study nonstop,” she said. “I retain all of the information that I acquire while on Adderall, so it works for me. I do this fairly regularly, because I go to school and have a full-time job, so I need this.”

She also added, “One time, I was able to re-teach myself a month-and-a-half worth of class material in one night. It really does help you focus.”

When asked about the side effects she dealt with after taking the stimulant, Victoria said, “I forgot to pee! I didn’t eat. I had a huge headache. Those are the negative effects.”

However, she said Adderall gave her a few positive effects as well.

“It made me really happy,” explained Victoria. “I talked a lot, and it made me engaged in every conversation that I had.”

While many students may believe Adderall has more positive effects than negative, the truth is this drug has some scary risks. According to a 2011 CNN article, one doctor said Adderall “can produce jitters, headaches, stomach problems or even eventually lead to psychosis, a mental disorder that includes the loss of contact with reality.”

Between 2005 and 2010, emergency room visits related to ADHD stimulant medications (like Adderall) for non-medical uses tripled, and it quadrupled in young adults, according to the Daily Beast.

Marijuana Continues to Thrive
It seems that since the dawn of time, marijuana has been a staple drug for college students. In fact, smoking "weed" has become a sort of rite of passage for many of them. Go to any college party, and you might see a group of students relaxing and having a good time with their friends as they smoke the easily accessible drug.

Unlike speed or Adderall, most students are not using marijuana so they can focus or study for an exam, or even to go out and party; many are smoking it in order to escape from the daily pressures college throws their way.

Kyle* and Adam* are two CSUN students. Adam, a sophomore, smokes marijuana no less than two times a day. Kyle, a freshman, smokes it for recreational purposes about four times a week. They said it takes some of the stress out of their day-to-day lives.

“When I do use it, I gain insight and serenity,” said Adam. “It slows down time and makes me enjoy it. I become more conscious of what is happening around me; it heals me. I think of it as a way of socializing with others. I feel it provides a connection we all need.”

“I smoke marijuana to unwind and relax,” said Kyle. “After a day of school and work, I really just need to clear my mind, and marijuana does that for me.”

The two students smoke it in a variety of different ways: through a bong, with a pipe or a blunt. They also said they’ve used fruit such as apples, oranges and pears.

The side effects vary for both of them, but they seem to be mostly positive. Adam explained, “After I take the first hit, a rush of calmness starts from my shoulders and spreads through my entire body. Then, the curiosity kicks in, and an hour later I begin to get hungry. The next two hours, I slowly come back down to Earth.”

Kyle said, “It makes me slow down a bit, makes me take things into consideration. I like to be outside and just be one with nature.”

As blissful as marijuana might sound, some unpleasant stories tied to marijuana use have been reported. For example, marijuana has played a role in college student deaths. The Associated Press reported a Wyoming college student named Levi Thamba Pongi visiting Denver on spring break jumped to his death after eating a marijuana cookie on March 11.

An autopsy stated marijuana intoxication was a “significant contributing factor” to his death. After eating the “pot cookie,” the 19-year-old exhibited “hostile behavior” before jumping over the motel balcony.

College student drug use is nothing new. For decades, students have been experimenting with drugs for party, relaxation and academic purposes. After talking to these different students, it doesn’t look like this trend has any plans on slowing down anytime soon.