Special Edition - Coachella '14!: The big acts you’ve all been waiting for. 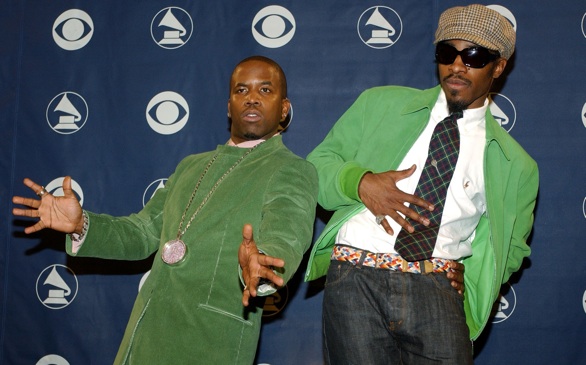 Big Boi, left, and Andre of Outkast pose at the Grammy’s 10 years ago.
(Credit: ABACA PRESS/MCT)

When the sun goes down at Coachella and after a full day of performances by underground and developing bands, it’s time to get a second wind as the big stars come out in the sky and on the stage.

Here’s a day-by-day breakdown of some of the must-see headliners at this year’s festival. Don’t party so hard that you miss out on these major acts!

FRIDAY, APRIL 11 & 18
OUTKAST – After a prolonged absence from the stage, their headlining shows at Coachella mark (an apparently temporary) return to live performance for Outkast. With Big Boi and Andre 3000 both rumored to be working on solo albums, Outkast’s future beyond its currently scheduled post-Coachella shows is sketchy. Catch ‘em while you can!

THE KNIFE – You never know quite what to expect from this Swedish electronic duo except to expect quite a spectacle. Brother and sister Olof Dreijer and Karin Dreijer-Andersson are said to be working on an elaborate stage setting for the North American tour they’ll embark on after Coachella. With any luck, they’ll preview some of the madness in Indio.

BRYAN FERRY – Whether performing as the lead singer of the much-revered Roxy Music or as a solo performer, Ferry has been an inspiration to and influence on hundreds of artists over the past four decades, turning out radio mainstays like “Love is the Drug,” “Dance Away” and “Slave to Love,” while also taking John Lennon’s “Jealous Guy” to No. 1.

SATURDAY, APRIL 12 & 19
MUSE – Send get-well wishes to singer Matt Bellamy, pronto! The Muse front man is experiencing laryngitis, and the band just had to cancel an April 3 gig in Brazil. It’s likely, though, that Bellamy will be back in fine form to wow the crowd for Muse’s headlining spot on the 12th. Expect a set list similar to that found on the band’s current release, last December’s Live at Rome Olympic Stadium.

PHARRELL WILLIAMS – Big news out of the Pharrell camp this month is that the singer will be appearing as a coach on the upcoming season of TV’s “The Voice.” He’ll be working with some very lucky contestants; Pharrell’s recent accomplishments include winning a GRAMMY for Producer of the Year, having a hit single with “Happy” and enjoying massive success with his current album G I R L.

LORDE – Aren’t you glad that Ella Marija Lani Yelich-O'Connor uses the stage name Lorde? It’s sure a lot shorter, seemingly like the road to success that the teenager traveled from obscurity in New Zealand to worldwide pop princess in record time. Expect to get the “Royals” treatment when the starlet takes the stage to perform music from her intoxicating and punnily titled album Pure Heroine.

SUNDAY, APRIL 13 & 20
ARCADE FIRE – This Canadian band has upped its status from beloved hipsters to bona fide superstars, and as such, they get the honor of closing out the festival. Fans and critics alike are referring to recent release Reflektor as a masterpiece, and (augmented by a few additional musicians added for the shows) the band is able to reproduce the album nicely on stage. Just ask the tens of thousands who just saw them perform at Lollapalooza in South America.

BECK – The always-mercurial L.A. native has recently released his twelfth album, Morning Phase, and some critics are calling it his best work since breakthrough album Sea Change. However, expect Beck to make the set list up as he goes. With a dozen album’s worth of material to choose from, he may or may not focus on the new stuff and may or may not play big hit “Loser.” But what he does play will be spectacular.

MOTÖRHEAD – The show will undoubtedly start with singer/bassist Lemmy Kilmister shouting “We are Motörhead, and we play rock ‘n’roll” and be followed by a set of gritty, amphetamine-fueled biker rock. The band is legendary, and that’s enough reason to see them. Another reason is because unfortunately, the hard-living Kilmister, 68, is experiencing serious health problems, and it is widely accepted that he might not be with us for very long. Once again: catch ‘em while you can!