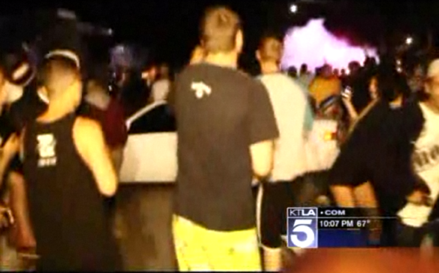 More than 100 people were arrested and dozens hurt Saturday during a daylong party in UC Santa Barbara's Isla Vista neighborhood, including 18 for their alleged roles in a violent clash between police and spring-break revelers, authorities said.

Many of the arrests were for public intoxication. It was unclear how many of those arrested were UCSB students.

About 15,000 people attended the event known as Deltopia, the Santa Barbara County Sheriff's Office said. The nighttime disturbance began when a UCSB police officer was struck in the head with a backpack containing large bottles of alcohol. When an arrest was made, the crowd became unruly.

Several people threw rocks and bottles at officers and an unlawful assembly was declared, a sheriff's statement said. During the melee, street signs were ripped down, small fires were set and sheriff's vehicles were damaged, officials said.

Authorities used tear gas, pepper spray and foam projectiles to control the crowd. After several hours, they were able to disperse the revelers and restore order.

Sheriff's spokeswoman Kelly Hoover said at least six officers were injured and four were taken to the hospital, including one who was hit in the head with a brick. All have since been released, but one UCSB officer will need surgery on his hand. She called the head injury from the brick "pretty significant."

"The situation turned into a mob mentality, us versus them type of situation," she said.

One deputy was injured before the melee while breaking up a fight. Hoover did not know if any of the event's attendees were still in the hospital.

Hoover said this isn't the first time Deltopia has caused problems. Almost 100 people were arrested or cited last year, and dozens were taken to the hospital. The party's precursor — Floatopia — took place on beaches and in the water, and had to be shut down because attendees were getting arrested, requiring water rescues, defecating on beaches and causing other problems.

This year's havoc, Hoover said, will probably prompt "a great deal of dialogue between community leaders and the public about how to proceed with this dangerous, unsanctioned event."

Hoover said part of the problem is the large number of out-of-towners the event attracts: "They have no investment in our community, and many of the people that are arrested are not from the area. That isn't to say local students aren't involved as well."

It was several hours before authorities were able to quell the disturbance.

The person who threw the backpack has been arrested, Hoover said, but others who injured officers or committed other crimes are still on the loose. Sheriff's officials are hoping newly installed cameras in the area will help in their search for other suspects.