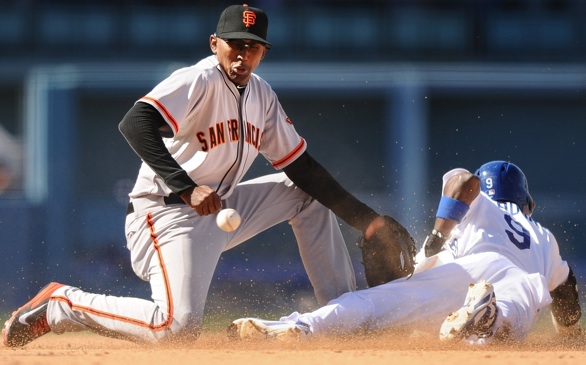 Matt Kemp was unhappy when the weekend began. He had just been activated from the disabled list the morning of the Dodgers’ home opener, but his name wasn’t in the starting lineup.

That changed about an hour later, when Yasiel Puig arrived late for batting practice Friday morning. Kemp started and ultimately played every inning over the weekend against the San Francisco Giants.

By Sunday, it had become much more difficult for Dodgers manager Don Mattingly to remove Kemp from the lineup. The center fielder hit two home runs against Giants starter Matt Cain and the Dodgers salvaged the finale of the three-game series, winning 6-2 before an announced crowd of 48,367.

Puig, meanwhile, was on the bench with an injury that Mattingly termed a strained ligament in his left thumb.

Would Kemp have started the game if Puig was healthy?

“Do I have to answer that?” Mattingly said nervously, rubbing his face. “Yeah, he starts it.”

The performances by Kemp and shortstop Hanley Ramirez — who also hit two home runs and a double — masked the Dodgers’ so-called “four outfielder problem” for a day. If Puig is healthy when the Dodgers host the Detroit Tigers on Tuesday, something Mattingly didn’t rule out afterward, the question of who starts in center field and right field will persist.

Sunday, like most days, a surplus of power-hitting outfielders was a good problem to have.

The Dodgers were looking to avoid a three-game sweep in their first homestand of the season. They did behind the four home runs, a strong six-inning start by Zack Greinke, and three scoreless innings from the bullpen. Dodgers relievers allowed only two runs in 15 2/3 innings in the series.

The breakout performance belonged to Kemp, who had hit only one home run since August of last year.

“It has been a while so I was pretty excited,” he said. “I’m glad we could get on the board.”

Kemp started the scoring with a home run to left-center field in the second inning. Ramirez made it 2-0 in the fourth inning with a blast over the Dodgers’ bullpen that was conservatively estimated at 422 feet. He finished 3 for 4.

After a double by Adrian Gonzalez, Kemp launched a home run to right-center field that gave the Dodgers a 4-0 lead in the fourth inning.

All seven of the Dodgers’ hits went for extra bases, including a double by Greinke. According to the Elias Sports Bureau, the Dodgers haven’t collected seven or more hits in a game with no singles since at least 1900.

Brandon Belt and Hunter Pence hit solo home runs off Greinke in the sixth inning. In his second start of the season, the right-hander scattered six hits, walked none, and struck out eight batters in six innings.

Comparing his pitches to his first start of the season, “everything was better today,” Greinke said.

“We thought he was good in San Diego,” Mattingly said. “His breaking stuff was good down there. He used a lot of offspeed. Tonight it looked like he had more confidence in his fastball, used it more. ... (He) really felt he could’ve went farther. That was a good sign for us, that he still felt he had more in him when we took him out.”

Although an X-ray on Puig’s wrist Saturday night was negative, he underwent an MRI exam before Sunday’s game and did not play. He was seen on the bench wearing a protective shield over his left hand.

Mattingly called Puig “day to day.” Puig did not speak to reporters before or after the game.

If Kemp continues to produce like he did Sunday, the Dodgers can take their time with Puig, who jammed the thumb sliding head-first on the basepaths Saturday.

The team would prefer that Puig slide foot-first. A similar injury to his left thumb last August sidelined Puig for one game.

Mattingly, however, knows that Puig has difficulty changing the way he plays.

“It’s hard to stop guys from doing what they do naturally,” he said.

There are exceptions to that rule, like age and injury.

Kemp’s surgically repaired left shoulder sapped his prodigious power last year. He didn’t hit his first home run of 2013 until April 24. His next came more than a month later.

Ramirez, who underwent the same surgical procedure on his shoulder in 2011, can testify. “From the beginning after the surgery I was talking to him and kept telling him, ‘Stay strong mentally because it’s not going to be easy,’” Ramirez said. “He told me, ‘You were right,’ and kept working, got here early, and did whatever he had to do to get better.”