UConn's Dynamic Guard Duo Too Much for Young Kentucky 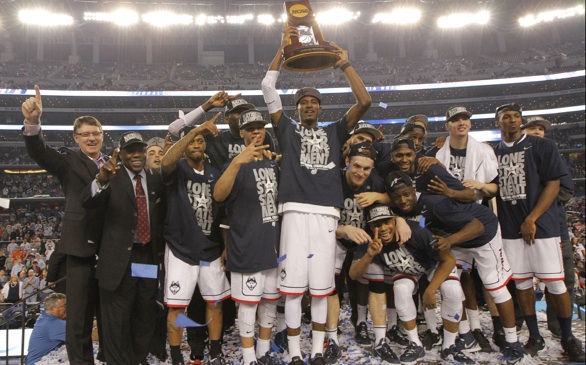 ARLINGTON — The battle of the backcourts turned out to be one-sided Monday night in the NCAA championship game at AT&T Stadium.

Kentucky’s freshman twin brothers, Aaron and Andrew Harrison, in the end couldn’t match the battle-tested nerves of Connecticut’s Shabazz Napier and Ryan Boatright. The Huskies’ duo combined to score 36 points and hand out six assists to help lead UConn to a 60-54 victory.

The Harrisons combined to shoot 6 of 16 from the field for 15 points and five assists, which all came from Andrew Harrison. The Harrisons didn’t score the final 15:29 of the game. Andrew Harrison’s eight points all came in the first half. UConn’s defense stifled Kentucky for much of the night, and it started with the Huskies’ guards.

“It took us a while to get started, and when you have good guards, you can’t really just do that because they can control the ball, control the game, and we just ran out of time,” Aaron Harrison said.

Napier, the Most Oustanding Player of the Final Four, drilled a 3-pointer to give the Huskies (32-8) a 51-47 lead with just under seven minutes to play. Boatright, who had just turned his ankle at the nine-minute mark, dribbled toward the left side of the paint before pulling up and hitting a jumper that pushed UConn’s lead to 56-50 with 4:13 remaining.

“I’ve got a lot of heart,” Boatright said. “I wasn’t coming out. My teammates really helped, but we put too much work in all year for me to give up on an ankle sprain. This moment was too big.”

“Great player, great leader,” Boatright said of his All-America teammate. “He’s my brother. I love him.”

UConn reserve Lasan Kromah played only 20 minutes Monday, but they were big. In the final minutes, Kromah came down with vital rebounds to secure the win. He grabbed a defensive rebound after Julius Randle’s miss with 2:18 remaining and then grabbed an offensive rebound with 1:54 to go and the Huskies clinging to a 58-52 lead. Kromah then made two free throws with 25 seconds left.

UConn became the first No. 7 seed to win the NCAA title. The Huskies are the only No. 7 seed to reach the final. It’s their fourth title since 1999. Shabazz Napier, Niels Giffey and Tyler Olander also won titles with UConn in 2011.

UConn built a 15-point lead with six minutes remaining in the first half before Kentucky stormed back. The Wildcats’ previous largest deficit of the tournament was 13 points. Kentucky finished the half on a 16-5 run to pull within 35-31 at halftime.