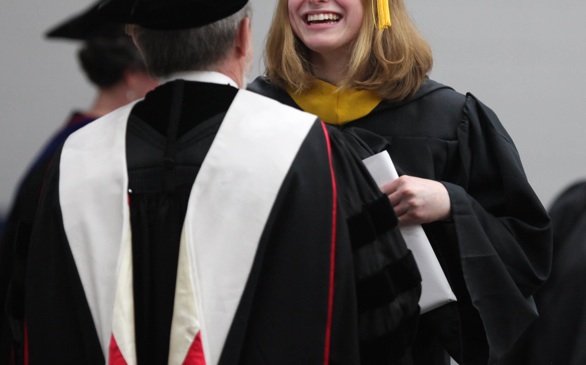 Surprisingly, the lure of getting a degree faster is not that appealing to many.
(Credit: Rick Wood/Milwaukee Journal Sentinel/MCT)

Finishing college in just three years makes a lot of sense. Not only will college students find themselves in the real world making real money sooner, they also save tens of thousands of dollars.

However, Time reports very few college students around the country are actually graduating three years after starting college, despite it being a super money-saving tactic. Why wouldn't all college students participate in an accelerated degree program that obviously cuts college costs tremendously?

Well, graduating in three years is just not as easy as it sounds.

One of the reasons is that it's difficult to get enough credits to graduate in three years, especially if you have a major such as nursing or engineering.

Also, it's a huge challenge! Some students have to use AP credits or summer classes to graduate in four years, let alone three. Even more, students just aren't willing to stress themselves out with a hectic course schedule. After all, college is supposed to be both work and play.

According to Time, colleges that do offer an accelerated degree program caution students from graduating in three years. Going through college too fast could lead to picking the wrong major and missing out on important life skills.

The bottom line: graduating in three years is not for everyone.