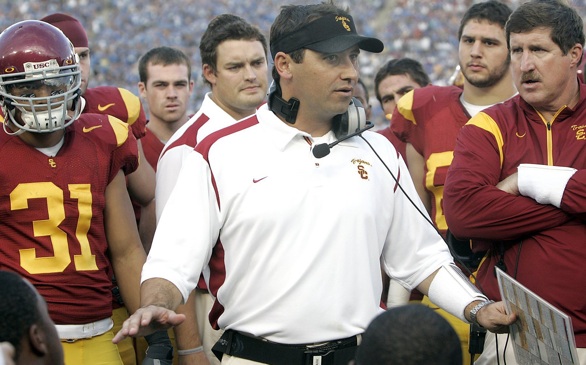 USC coach Steve Sarkisian said Tuesday he expects to name a starting quarterback by the end of spring practice later this month.

Neither returning starter Cody Kessler nor his challenger, Max Browne, knew Sarkisian might make his decision in the next 10 days. Kessler is the overwhelming favorite after starting 14 games last season and being the assumed leader during the first 10 spring practices.

“I’m not doing what I did last year, stressing over the wrong thing and worrying every day about whether I would start,” Kessler said. “I was always trying to be perfect (during last year’s competition) and that got in my head.”

Kessler acknowledged his advantage in the competition by starting last year.

“That does help,” he said. “I played in a couple big games in probably the worst circumstances (with two coaching changes).”

Browne would probably prefer if Sarkisian waited until fall training camp, to give him more time to compete with Kessler.

“I have stuff to correct but I’m getting more comfortable every day,” Browne said.

Sarkisian said Kessler’s experience didn’t give him the starting job by default.

“That’s a piece of the puzzle,” Sarkisian said. “It’s not the entire puzzle. It’s a part of it. You compete by doing your job.”

Quarterback David Sills, who committed to USC when he was in the seventh grade, finally visited the campus Tuesday and met with Sarkisian for the first time since the coach was hired in December. Sills attended the quarterbacks meeting and also attended a portion of practice.

He is scheduled to visit Alabama on Friday, where he will see former USC coach Lane Kiffin, who offered Sills a scholarship when he was 13. Sills will graduate from Eastern Christian Academy in Elkton, Md., in December.

The quarterbacks threw several interceptions and the centers experienced problems on shotgun snaps during practice. Sarkisian attributed some problems to practicing for the first time using silent signals.

“We obviously saw some glitches from that,” he said.

Sarkisian said he would like to practice more in full pads, but knows it is difficult with depth issues.

“I’m a realist enough to know we have two (healthy) running backs right now,” he said.

Tailback Tre Madden and fullback Jahleel Pinner were the only healthy backs at practice. The Trojans were so thin Tuesday that walk-on quarterback Conner Sullivan switched to tailback.

Running backs Javorius Allen (ankle), Ty Isaac (back) and Justin Davis (ankle) are currently out. Madden said he didn’t mind so much work because he was hurt the second part of last season with a pulled hamstring.

“It was hard being on the sideline,” he said. “(The hamstring injury) didn’t go away. I came back too soon.”