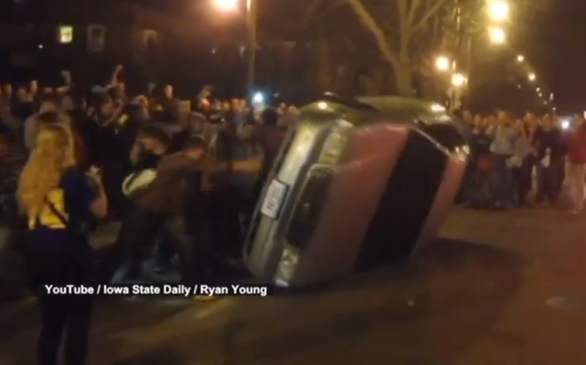 Within the past week or so, there have been numerous riots at college campuses across the nation that have gained media attention.

But why were Iowa State University students rioting Tuesday night?

That seems to be the question no one has answers to.

"When you hear riot, usually it's about an issue. This isn't something like that," said Ames Police Commander Geoff Huff. "There's usually a flashpoint but it's difficult to put a finger on what that was…There was no rhyme or reason for it."

The Iowa State Daily reports students were chanting on the streets, flipping over cars, launching beer bottles and other objects at the police, tearing down light poles and setting off fire crackers during the university's second night of Veishea, a weeklong celebration.

One male student was reportedly hit by a light pole and sustained serious head injuries.

Two arrests have been made, but there will likely be more.