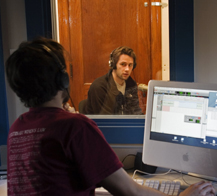 Untitled Document To a group of Swarthmore College students, the news reports from Iraq often seem like a continuous loop of stories about deadly roadside bombings, inconclusive street skirmishes and baffling political disputes.

What’s missing, they say, are the voices of ordinary Iraqi citizens.

Their solution is "War News Radio,’’ a small program that’s starting to get big attention by broadcasting incisive accounts and observations of people caught up in the conflict.

Using the tools on their desks – phones and computers – the student journalists connect with Iraqis and others in the region to paint a portrait of daily life that’s all but invisible on the nightly news.

"We had this pretty grand hope that once we began educating ourselves, we could actually bring something to the media that people weren’t getting," says Amelia Templeton, a senior history major and one of three "War News Radio’’ editors.

A recent program featured an Iraqi artist describing how he incorporates images of the violence into his paintings. In another show, a U.S. Marine, a Muslim, talked about what it’s like to fight in Iraq. In a third segment, the head of the Iraqi stock exchange discussed the state of the country’s financial infrastructure. (Yes, Iraq has a viable exchange, though these days the fortunes of its stocks are displayed on a dry-erase board, hand-written in felt-tip marker.)

"People manage," says Wren Elhai, a 19-year-old political science major. "People carry on what would be almost normal lives, if they weren’t telling you about hearing a bomb go off."

How do the students snare interviews with people living 6,000 miles away?

They simply call them up. Of course, they have to find them first.

For that they mine names and contact information from college faculties, relief organizations, friends of friends. The Internet offers directories that are the next best thing to an Iraqi phone book, along with blogs written by combatants and civilians who can be reached via e-mail.

Top that off with Skype software – which allows people to talk over the Internet for free, using microphones and headsets – and it can be easier to reach an Iraqi from a college newsroom in Swarthmore than from a hotel room in Baghdad.

"Getting in touch with Iraqis has not been the insurmountable challenge it seemed to be at the start," Elhai says. "You run into more brick walls trying to get someone in the U.S. military to talk to you."

The students ask questions that are disarmingly simple: Is the Iraqi university system still functioning? (Yes, despite widespread looting.) Do Iraqis ever go on vacation? (They do, to Egypt.) Will Iraq send athletes to the Olympics? (One, a skeleton sledder, the first Iraqi to compete in the Winter Games.)

At first, "none of us had any clue what we were doing," says Tev Kelman, 22, a senior majoring in anthropology.

But he and others had an interest in the war, a sense that history was occurring in front of them, and a belief that small, intimate tales could help tell the larger story.

"This war is this huge sweeping thing, these global effects, but all the day-to-day work on both sides is done by day-to-day people," Kelman says. "And their thoughts are not on the future of Iraq and America, but on keeping their family alive, and getting through the day."

For a piece on the danger of traffic checkpoints, Kelman interviewed an Iraqi physician whose daughter was shot and killed – apparently by mistake – by U.S. troops. The man’s voice is brittle with anger and grief.

Balancing his words are those of an American soldier, who talks about being on duty at a checkpoint – that is, what it’s like to be hot, tired, and most of all afraid that the car speeding toward you is filled with explosives.

"One thing I really like about this journalism is you’re not required, or even allowed, to deliver a verdict," Kelman says. "An OK answer is, ‘It’s complicated.’"

The show was the idea of "60 Minutes’’ producer David Gelber, a Swarthmore alumnus and board member. Early in his career, Gelber helped produce daily reports on the Vietnam war at listener-funded Pacifica Radio.

Watching the news from Iraq, Gelber says, he didn’t see the electronic media distinguishing itself. Nuanced reporting was being displaced by coverage of ongoing carnage.

He proposed that Swarthmore help students create a program modeled on the Pacifica approach, which used personal narrative to illuminate complex issues.

"War News Radio’’ creaked into production early last year, housed in a homemade sound studio in the basement of the campus student center. Since then it has moved to a larger space. Because the college doesn’t offer journalism courses, the staff – about two dozen students participate – has had to learn as it goes.

"We want to do an honest job," says Eva Barboni, a 21-year-old junior majoring in political science and economics. Adds Templeton: "We don’t have a political goal. We have a journalistic goal, and the journalistic goal is to be an independent voice, and try to get Iraqi voices into the American media."

"War News Radio’’ airs Fridays at 11 p.m. PST on WSRN-FM, and is also available via podcast and at www.warnewsradio.org.

Elhai hopes "War News Radio’’ gives people "a truer picture of what is going on" – even if he isn’t sure what that is.

"You sort of have this notion that you can go talk to people and figure out ‘the story.’ And you can’t," he says. "We talk to Iraqis and get as many conflicting answers as you’ll get in America."

Distributed by Knight Ridder/Tribune Information Services.
Article posted on 2/13/2006
This article has been viewed 2256 times.