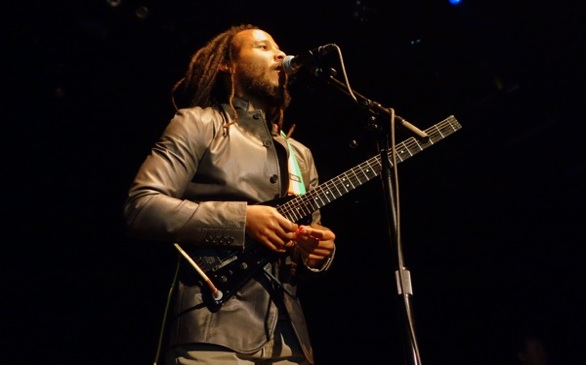 What a fantastic way to spend a Tuesday night in downtown Los Angeles.

He and his band kept the crowd grooving throughout the entire night, as everyone danced and sang to Marley's hypnotic lyrics. With strong and power vocals, it was incredible to see this icon perform freely and easily, his long dreads flowing as he moved around the stage.

Club Nokia is a large yet intimate venue. The bar was packed, and the staff was getting drinks to everyone at lightning speed. There was a breezy, mellow feeling in the club and although it was a full house, it was easy to get anywhere you wanted to go. The audience was filled with people of all ages, from those in their early 20s to folks in their 40s and 50s, but that didn't matter; last night, we were all one.

Marley began the night with numbers "Into the Groove" and "Love is My Religion." Instantly, you could definitely tell he was carrying on his father's legacy, with his impeccable grooves and clear message of hope and positivity.

The house went crazy when Marley sang "Wild and Free." However, they also expressed enjoyment when he performed songs from his latest album, Fly Rasta. Although many in the audience were probably hearing these songs for the first or second time, we all sang along to them as if we knew them by heart. "Fly Rasta," "Moving Forward," "Sunshine" and "Give it Away" are sure to be huge hits.

Some other highlights from last night's performance include "Get Up, Stand Up" and "Is This Love."
"Tomorrow People" got everyone jumping and dancing, as we all seemed to dig the rhythmic flavor.

Overall, Marley's show was truly an epic experience; it was as if were all a part of something very special and elite.