Jim Jarmusch on New Ground with Only Lovers Left Alive 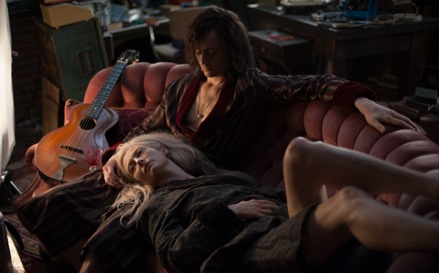 It's not so much that Jim Jarmusch has edged toward the mainstream but rather that the mainstream has moved closer to him. Over the years the gravitational pull of his slant, laconic sensibility in films such as Mystery Train, Dead Man and Broken Flowers has brought him in contact with a classic gallery of performers including Tom Waits, Joe Strummer, Gena Rowlands, Johnny Depp, Bill Murray and many more.

Though he first emerged from the outcast environs of the late '70s/early '80s post-punk scene of New York, he has recently received retrospectives from the Academy of Motion Picture Arts and Sciences in Los Angeles and the Film Society of Lincoln Center. At 61 he is no longer a punk outsider but part of the pantheon.

His latest, Only Lovers Left Alive, even makes the vampire film cool again. He uses the idea of immortality to craft a celebration of the continuity of culture, the eternal issues of love, life and loss that drive the creation of art across the ages.

The film, opening April 11 in Los Angeles, stars Tilda Swinton and Tom Hiddleston as Eve and Adam, a romantic couple in every sense of the word. As vampires they have been together for centuries as bohemian vagabonds, often in just the right place at just the right time to witness cultural explosions and renaissances. He has of late been living in Detroit, tinkering with musical instruments and science experiments, while she has been off in Tangier for more spiritual pursuits.

The cast also features Mia Wasikowska as Eve's wild-child younger sister and Anton Yelchin as a human assistant to Adam who is part roadie, part Renfield, as well as Jeffrey Wright and John Hurt.

"The center of it is a kind of tenderness. It is a love story," Jarmusch said during a recent phone call from his longtime stronghold on New York's Lower East Side. "Even the title is very positive and optimistic, in terms of survival tendencies of the species. I find it a celebration of consciousness and all the things that we encounter in our brief lifetimes.

"That's why it's not a monster movie, it's not a horror film, it is a love story," he said. "They just happen to be vampires."

Though the character names have obvious biblical overtones, for Jarmusch the inspiration came more from Mark Twain's The Diaries of Adam and Eve. (In a film full of cultural references it is conspicuously not mentioned.)

During a recent interview in Los Angeles, Swinton recalled how Jarmusch called her up one New Year's Eve to first tell her of the Twain book and his idea of linking it to a century-spanning, bloodthirsty love connection. "I think there's something much more romantic about people being as different as Adam and Eve are and still really digging each other," she said, "supporting each other even when from a distance you're going, 'You're weird, but I get a kick out of our difference.'"

For Only Lovers Left Alive Jarmusch opened himself up to new experiences. He had initially tried to make the film before his previous film, 2009's The Limits of Control, but was unable to raise the financing. Reaching out to British producer Jeremy Thomas, the project began to move forward.

Though the film would also shoot in Detroit and Tangier, it was Thomas who pointed Jarmusch toward shooting interiors in Cologne, Germany, where Thomas had recently made other projects such as David Cronenberg's A Dangerous Method.

Jarmusch had never before shot on a soundstage and likewise worked on digital for the first time to capture the film's nighttime palette with cinematographer Yorick Le Saux. Other key positions were also filled by people Jarmusch had not worked with before, such as production designer Marco Bittner Rosser and editor Affonso Goncalves.

"He's open because he wants to discover what he's doing whilst he's doing it," said Thomas from London. "He's a very instinctual filmmaker, and the film sort of comes together in the making of the film. Yes, it's scripted, but the whole film is not as preconceived as many films and he needs a sort of freedom to make a sort of specific film that is identifiably a film of his, as a film of Jim Jarmusch."

Though Swinton had worked with Jarmusch before, for Hiddleston it was the first time. The actor recalls his first contact with Jarmusch's work, remembering the very theater in Oxford, England, where he saw 1999's Ghost Dog: The Way of the Samurai, and has been a fan ever since.

In getting in sync with the director's sensibility and the gothic melancholy of the character of Adam, Hiddleston took in Jarmusch's suggestion to think of Pink Floyd's raven-haired, wild-eyed former frontman Syd Barrett while re-reading Hamlet.

"We did find a commonality, because it was always about specifics," said Hiddleston, on the phone from a movie shoot in Toronto. "What kind of music does Adam make? What does he like? What doesn't he like? Through those conversations I began to get a sense of Jim's palate, his speed, his tone and his style."

Both Swinton and Hiddleston draw a comparison to Jarmusch's recent work as part of the band Sqürl as a reflection of the collaborative nature of his work, how it can be singular while he remains so seemingly open to others. The movie is a reflection of his own broad-ranging interests, across literature, music, art and science — "I'm a real nerd," said Jarmusch, noting his recent pursuits as an amateur bird watcher and studier of fungi.

"That's what's so great about working with him, is his passions rub off on you," said Hiddleston. "He loves the music that Adam loves; in a way there is some of Jim in Adam, but there is also so much of Jim in Eve, and the things they love are the things that he loves."

"I'm neither of them, but I'm both of them. It's not a portrait of me in any way," Jarmusch said. "I feel very close to Adam in a lot of ways, and Eve I aspire to be more like. I wish I had more of her qualities as I get, I don't know what the word is, older. Or more confused."

Only Lovers Left Alive releases in theaters in Los Angeles at The Landmark and ArcLight Holywood and in New York at the Elinor Bunin Monroe Film Center, Walter Reade Theatre and Landmark's Sunshine Cinema on Friday, April 11, 2014.

Enter to win a poster for Only Lovers Left Alive by clicking here!

Special Features
Digital theater is all the rage, but could it destroy the live stage?
563 views

Special Features
Now’s the perfect time to dive into musicals. Here are our critic’s top 7 to watch
325 views

Special Features
Oscars 2020: Who will win and who should win
925 views

Special Features
Secret screenings. Redacted scripts. How they make the twists in ‘This Is Us’
387 views