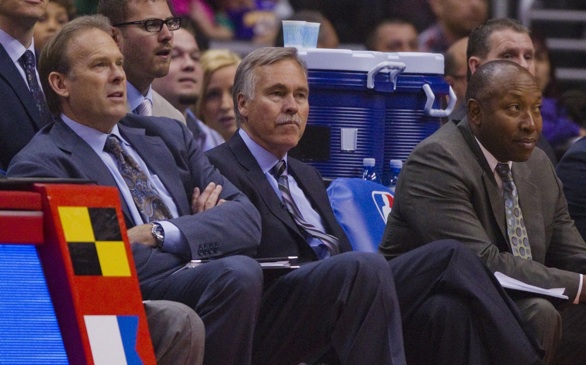 Amid a failed season in which losses piled up at nearly the same rate as trips to the trainer’s room, the Lakers joined the history books noting something painfully obvious well before it become official.

The Lakers’ 145-130 loss Tuesday to the Houston Rockets at Staples Center ensured they will clinch the worst record since moving the franchise from Minneapolis to Los Angeles in 1960. The 1974-75 team finished with a 30-52 record, a mark the current Lakers could have matched with a victory followed by an undefeated mark in their four remaining games. The Lakers also provided their worst defensive performance, since, well conceding 143 points two weeks ago in Minnesota.

“It’s an asterisk-type season,” said Lakers guard Jordan Farmar, who appeared Tuesday after missing the past 11 contests because of a strained right groin. “Everybody’s been hurt. We haven’t had a fair shot as a team to see if we’re really that bad.”

The Lakers’ roster missed a combined 290 games this season because of injuries, the ones most notably to Kobe Bryant (fractured left knee) and Steve Nash (nerve irritation in back) that kept them out for all but a combined 21 games. Nash eclipsed Golden State coach Mark Jackson for third place on the NBA’s all-time assist list, but he reported feeling more nerve irritation in his back and missed the second half. The Lakers then allowed the Rockets to score 48 third-quarter points.

“I probably won’t play again,” Nash said. “If I get a good recovery within the next month, I’d love to play again. A big goal for me was not to go into the summer injured. The fact I had a setback today was kind of frustrating.”

Even leading up to Monday’s NCAA men’s basketball championship game between Kentucky and Florida, the Lakers became part of the national conversation.

“I hate it for John more than anybody,” D’Antoni said. “That puts an undue pressure before a big game that he doesn’t need to be distracted with.”

On Tuesday’s Dan Patrick Show, Chapman backtracked by predicting Calipari will coach next season at Kentucky. Meanwhile, the sense within the Lakers organization suggests no decision will be made on D’Antoni’s future until shortly after the season ends April 17. But the Lakers are leaning toward retaining him and will decide well before the NBA draft on June 26.

The Lakers will owe D’Antoni $4 million next season regardless whether he coaches or not. They also are mindful that both firing D’Antoni may not immediatley solve their problems and could lead to a coaching carousel after fielding four coaches in the past five seasons.

The Lakers showed more decisivness by extending Lakers general manager Mitch Kupchak to a multi-year extension on Tuesday after serving that role for the past 14 years. Kupchak had one year left on his contract, and the Lakers did not want him to have lame-duck status next season.

“If you don’t like that and can’t take it, don’t be in our business. If you can’t get up the next day and do your job, then go find another job,” D’Antoni said. “You try to keep that perspective.”

“John Wooden is not going to be dealt a great hand with all the change and injuries we’ve had,” said Nash, referring to the former UCLA coach who won 10 NCAA championships. “It’s a tough situation. I realize he’s not Phil [Jackson], somebody who’s beloved and extremely successful here.” Nash said. “But it’s not been a fair fight in some respects.”