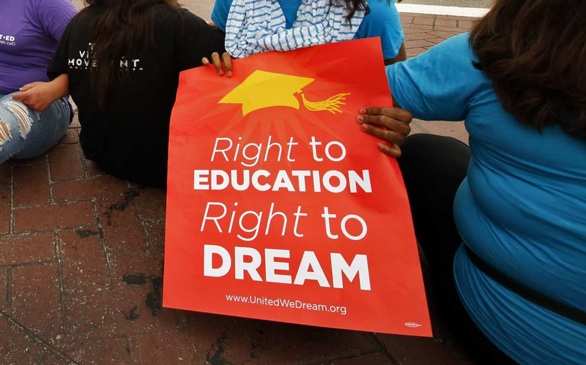 Senate Bill 1210 would make available $9.2 million for University of California and California State University campuses to administer loans to undocumented students, who are ineligible for federal financial aid and most private loans.

“Many undocumented students still lack the financial wherewithal to pay for school,” Lara said at a news conference Wednesday. Faced with an estimated financial aid gap of $5,000 to $6,000 at UC and $3,000 at CSU, “they are having to risk a withdrawal from college.”

California has already taken several steps over the past 13 years to make college available and more affordable for undocumented students. In 2001, the Legislature extended in-state tuition to undocumented immigrants who graduated from a California high school. Three years ago, it made them eligible to apply for Cal Grants.

But undocumented students at the news conference said that can still leave them thousands of dollars short to cover costs such as housing, books, transportation and food.

“Unfortunately, immigrant students like me sometimes need extra funds to pay for school, but we have nowhere to turn,” said Deisy Caro, a recent Sacramento State transfer who said she worked part time for seven years, while attending community college, to pay for her education.

Lara was joined at the event by Sacramento State President Alexander Gonzalez and UC President Janet Napolitano, who said the university “stands strongly behind this bill” to put undocumented students on equal footing with their peers.

“They have done everything right,” Napolitano said. “It’s about opportunity and it’s about fairness.”

Napolitano’s support for the bill comes amid continuing controversy over the role she played in deporting undocumented immigrants as secretary of homeland security under President Barack Obama.

Her appointment as UC president last fall was strongly opposed by campus immigration activists. UC Berkeley law students planned another protest for Wednesday evening outside an event Napolitano was scheduled to attend.

“The policies she propagated created violence in our communities,” protest organizer Monika Y. Langarica said in a phone interview. “Our deportation numbers are soaring.”

Langarica added there was nothing Napolitano could do to remedy her past actions and she should step down as UC president.

Napolitano, who announced in October $5 million in new funds to support undocumented immigrants at UC campuses, believes her critics have the wrong impression of her.

“If you look at my record going back to when I was governor (of Arizona), I was always strongly in support of the DREAM Act,” the deportation deferment for undocumented minors, Napolitano told The Sacramento Bee following the news conference. “Those students don’t know the whole story or the whole record.”