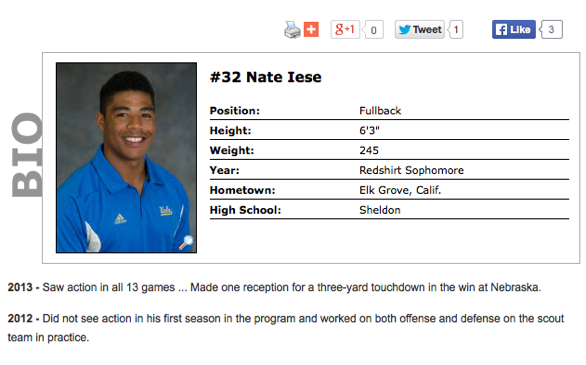 This is no longer a secret, not after the Bruins deployed linebacker Myles Jack as a part-time running back who churned out seven touchdowns in four games. Not after four other defensive players were used as his blockers, two of whom each recorded a touchdown of their own.

Nate Iese's path to positional versatility is a little more linear. He arrived at UCLA in 2012 as a three-star defensive end, and spent that season on both the scout team offense and defense. Half a year later, he switched to Y-receiver -- the rough equivalent of a tight end in UCLA's spread.

Last August, he switched to fullback. He reprises the position this spring, at least in name. This time around, he'll be asked to use his 6-foot-3 frame as a pass catcher in the flat or on seams up the middle.

"It's definitely changed a lot," Iese said of playing fullback. "Last year was a lot more just head-on blocking, base blocking. Which was perfectly fine, but I think this will expand not only this position, but the offense as a whole."

Key to his transition is new running backs coach Kennedy Polamalu. Before coming to UCLA in December, the 50-year-old was an assistant for the Jacksonville Jaguars from 2005-09. When he showed Iese film of past fullbacks he had worked with, included in the list was NFL veteran Greg Jones. A former Pro Bowl alternate, Jones measures 6-foot-1, 265 pounds.

For the record, Iese is 245 pounds. Not quite the same dimensions, but maybe just right for the Bruins. And for him.

"I feel more comfortable at this position than any position I've ever played," he said.

After participating in just two spring practices, Malcolm Bunche looks on track to start at left guard for UCLA -- a position vacated by Xavier Su'a-Filo, a three-year starter and second-team AP All-American.

Considering the early returns, Bunche's decision to leave Miami as a graduate transfer is paying off. The 6-foot-7 lineman started at left tackle for the Hurricanes in 2012, but was mostly a reserve guard last season. After receiving what he said was a fourth-round NFL draft evaluation, he figured another year would boost his stock even further.

Only, Coral Gables wasn't the place do it.

"I felt like I put in the time on the practice field and the weight room," Bunche said. "They kind of didn't play me as much as I would have like to have played. It was time to leave."

He narrowed down his potential destinations quickly, picking UCLA over Texas Tech due to the connection he felt with the Bruins' coaching staff.

Inside linebacker Isaako Savaiinaea left UCLA's practice early on Wednesday morning with his left arm in a sling. The severity of his shoulder injury is not yet clear, but he did not return to the field.

The Bruins are currently without both their starting inside linebackers from last season, with Jordan Zumwalt training for the NFL draft and Eric Kendricks still recovering from ankle surgery.

Savaiinaea started one game last season, and is a candidate to replace Zumwalt.