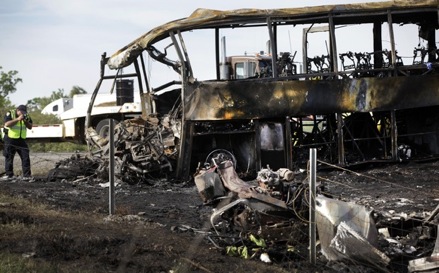 LAUSD students were on their way to visit Humboldt State University on a college tour.
(Credit: Rick Loomis/Los Angeles Times/MCT)

ORLAND, Calif. — Investigators for the California Highway Patrol and other agencies cautioned Friday that discovering the cause of Thursday’s horrific bus crash will be a lengthy process, possibly taking between three to six months.

In a press conference at the CHP office in Willows, Calif., officials also said positively identifying the victims may be difficult and will rely in part on dental records and use of DNA.

The bus and FedEx truck were consumed in a massive fireball after the 5:40 p.m. PDT crash, which occurred when the southbound FedEx truck swerved across the Interstate 5 median near Orland and smashed head-on into the bus, which carried 48 high school students and chaperones headed to Humboldt State University.

Nine people were dead at the scene, with the last of the bodies removed from the site at 1:40 a.m. Friday. The bodies of three of the victims were taken to a facility in Orland and six to Willows. They will be moved to Butte County for autopsy and identification, which officials said is complicated because of the fire.

The 10th person who died ran from the bus screaming for help while on fire, witnesses have said. Officials confirmed he was the man airlifted to the University of California Davis Medical Center Thursday night with burns over 95 percent of his body.

The Sacramento coroner identified him Friday as Anthony Arzola, a 26-year-old Southern California resident who worked as a recruiter and counselor for Humboldt State.

“Arzola is remembered by colleagues at Humboldt State for his passionate commitment to helping low-income and first-generation students get into college,” a statement on the school website said. “He dedicated his career to that work. He had been working as HSU’s Admissions representative in the Los Angeles area for the last year.

“The campus community extends its deepest condolences to Arthur’s family and friends. Words cannot express our sadness, and we are here to support them in any way possible.”

Another 31 people were injured and taken to seven hospitals through the region.

The CHP said investigators still have no idea what caused the crash, saying they don’t know if the truck driver fell asleep, had a mechanical problem or some type of accident that caused him to swerve into oncoming traffic.

The truck clipped a Nissan Altima with two people inside before it hit the bus, but they only suffered minor injuries and are expected to recover.

The National Transportation Safety Board sent a “go team” that arrived on scene at 10 a.m. Friday and will conduct a “side by side” investigation with the CHP, officails said.

“It is a long tedious process,” CHP northern division chief Ruben Leal said. “We may not have some answers for months.”

Local News
L.A. is home to heavy industry— and more federal deals not to prosecute polluters than anywhere else
519 views