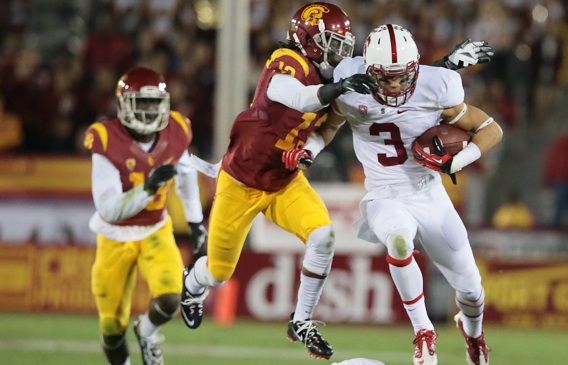 The USC cornerback was selected defensive player of the game in the Las Vegas Bowl after deflecting a pass and making seven tackles in the Trojans' rout of Fresno State.

The 6-foot, 175-pound junior from Pasadena built on the performance during the off-season and has been playing with a veteran confidence throughout spring practice.

Seymour started on the left side last season, but with senior Josh Shaw sidelined while recovering from a stress fracture he also has played on the right.

"I'm trying to get familiar with both, so I can play both sides whenever I need to follow the top receiver, if it comes down to that," Seymour said Thursday.

Seymour has steadily progressed since arriving at USC from Pasadena Muir High in 2012.

As a freshman, he played as a backup in eight games but was slowed by the effects of a concussion.

Last season, he started 11 games and intercepted a pass in the Trojans' victory at Oregon State, their first in Corvallis, Ore., since 2004.

Fresno State went into the Las Vegas Bowl with a high-powered passing attack, but Seymour helped shut it down.

"That last game, I just came out and put it all together," he said. "All the small details came together and I was executing."

"Coach Heyward gets to focus on us," Seymour said, "and we can focus on technique."

Redshirt freshman cornerback Chris Hawkins has been getting plenty of reps opposite Seymour. Shaw will return during training camp, the first chance Sarkisian and his staff also will be on the field with incoming freshmen.

Adoree' Jackson of Gardena Serra High, John "Juju" Smith of Long Beach Poly and Rashead Johnson of Long Beach Cabrillo are among those expected to get looks on offense and defense during training camp.

Asked whether Jackson would begin on defense, defensive coordinator Justin Wilcox joked, "As soon as he walks in the door, I'm going to pull him in my office."

Then he deferred to Sarkisian.

"I think he's going to get some of both," Sarkisian said, adding, "We've got a handful of those types of guys that can potentially do things on both sides of the ball."

While junior Cody Kessler appears on track to be announced as the starting quarterback, Sarkisian has not made it official.

"It's marinating," Sarkisian said of his decision. "You know when you've got a good steak and put something on it and put in the fridge and let it marinate? That's kind of what it's doing. I'm not ready to cook it yet."

Sarkisian praised defensive lineman Antwaun Woods, saying he has been "the standard on the defensive side of the ball," during workouts…. The Trojans practice Saturday on campus at 11 a.m.