More Than 4,000 Students Participate in LA Hacks Hackathon at UCLA 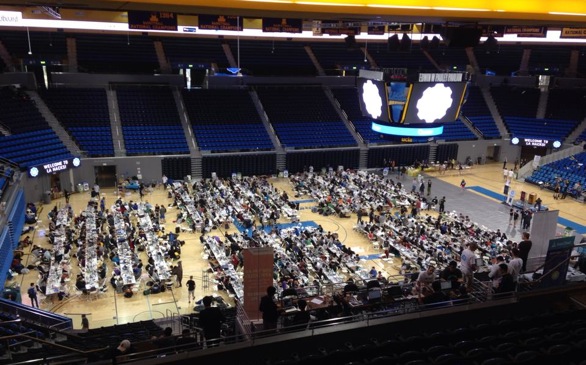 The basketball court at UCLA's Pauley Pavilion was teeming with young hackers this weekend as more than 4,000 students descended on the school for the second annual LA Hacks event.

The 36-hour hackathon drew developers from about 300 colleges including Stanford, UC Berkeley, USC, UC Davis, Harvard, MIT and Carnegie Mellon, and was touted by organizers as the largest hackathon in the nation.

The event kicked off Friday night with a "mystery keynote" -- Snapchat co-founder and Chief Executive Evan Spiegel. During his address, Spiegel shared some words of wisdom on finding success.

"I was fortunate enough to have my palm read by a wise old man in a Hong Kong temple. In addition to learning that I will be married and have a son before I am 30, he also gave me the three keys to success," Spiegel said. "They are as follows: 1. Hard work. 2. Ability. 3. Human relationships."

Eighteen hours in, dozens of students appeared wiped out by the round-the-clock hacking, sleeping on floors, air mattresses, bean bags, stadium seats, sleeping bags and, in at least one instance, on top of each other.

Michael Tran, 20, managed to nod off for three hours in the middle of the activity by finding an unoccupied massage chair by the upper concourse.

"I can't code without sleep," the computer science junior from UC Berkeley said.

"This was like our full-time job except for classes," Dor, a senior majoring in cognitive science, said of the UCLA students who helped plan LA Hacks. "We even ditched class and ditched quizzes to get this done."

As with any event involving college students, the free food and energy drinks were flowing. Half-eaten burritos and cans of Monster and Red Bull lined the long tables set up in the middle of the basketball court.

Registration and food were free thanks to a hefty lineup of corporate sponsors including Cisco, Flipboard, Yelp, Whisper, Quixey, Uber and Citrix. Students from across the state were bused in on Friday.

LA Hacks is set to conclude Sunday afternoon with closing ceremonies and awards presentations. The grand prize of $5,000 is being presented by Tinder; 20 to 30 smaller prizes will also be handed out.

As for next year, Dor hinted that the hackathon could continue to swell in size.

"We'll see. We can always go bigger," he said. "Bigger's cool. But we want to focus on quality first."