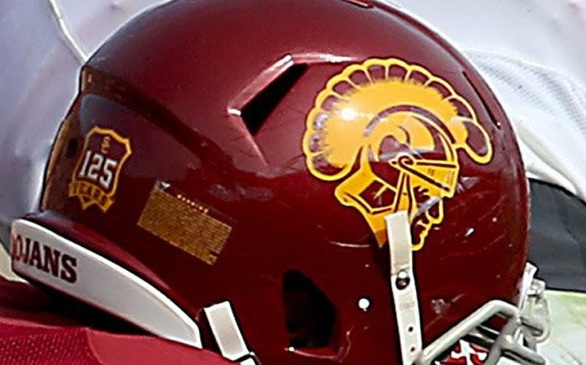 USC offered a scholarship to cornerback Ykili Ross of Riverside Poly on Saturday, which meant the Trojans already offered 68 recruits from the Class of 2015. New coach Steve Sarkisian is aggressively offering scholarships and inviting high school players to practices.

It’s a luxury most schools cannot do because there might not be another area with such a concentrated number of high school football players.

“It’s a unique setting,” Sarkisian said. “We’ve got a great deal of recruits within driving distance. That’s one reason USC’s been USC for so long.

Sarkisian can afford to be more aggressive than Lane Kiffin because the Trojans are allowed to sign 25 players this year instead of the NCAA-sanctioned 15. That means inviting a lot of local recruits to campus such as Thursday, when several prospects from Serra High in Gardena watched practice.

“There’s only two of us in Los Angeles (that can have this many recruits come to practice),” Sarkisian said. “Our assistant coaches don’t have to go to the airport, they can get in cars and get on the 405, 110 and 10 freeways.”

Wide receiver Victor Blackwell made progress Saturday with two 45-yard touchdown catches in practice but Sarkisian said the potential No. 3 receiver has good and bad days.

“It’s been a little bit inconsistent,” Sarkisian said. “There are days like today where he flashes and then a couple days where we don’t notice him. Hopefully, a day like today is inspiring so he can study.

He’s flashed four or five other practices. It’s the five or six other ones we have to get cleaned up.”

Sarkisian said he was not ready to officially name a starter. Or more accurately, junior Cody Kessler the starter since he takes most of the snaps with the first team and is the heavy favorite.

USC practiced about 20 minutes longer than usual because Sarkisian wanted to test the Trojans’ endurance.

“It was pretty clear we had a few guys that went into survival mode,” he said. “It will be good to show players on film what we’re looking for.”

USC concludes spring practice next Saturday with its annual spring game at the Coliseum. But with almost 20 players injured, Sarkisian said the game will likely be a practice with one period of tackling.

“The reality of it, we won’t be able to play a game, but I want to make sure we allow them to compete and give our fans a chance to see what this team is all about,” Sarkisian said.