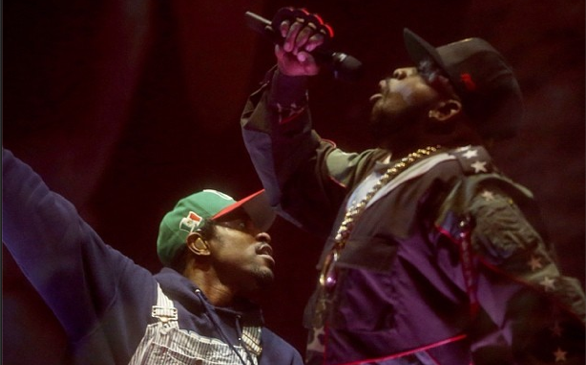 INDIO >> Justin Bieber, Beyonce, Jay Z and the reunion of Atlanta hip-hop group Outkast were just a few of the highlights that kicked off the first weekend of the Coachella Valley Music and Arts Festival.

On Friday, Girl Talk started the slew of surprise guests with Juicy J, E-40, Busta Rhymes and Too $hort and by day two of the festival, artists upped the game in pure Coachella fashion with megastars Jay Z and Puff Daddy, who both performed with Nas on the outdoor theater, while Beyonce danced on stage with her sister Solange inside the Gobi tent earlier in the day.

“It’s awesome. I’m glad I got to experience it,” said 21-year-old Diana Rivera of Los Angeles. “It’s my first time at Coachella, and I’m here just expecting to see one person. I didn’t expect to see all that.”

But Friday night may have been the topper for many festival fans as Outkast celebrated 20 years in the music industry.

The duo brought out guests Sleepy Brown, Janelle Monae and Future to varying degrees of success (Monae was well-loved, while Brown seemed to get a shrug from the audience).

After performing “Hey Ya!” to loud cheers, the group tried to bring out hip-hop artist Killer Mike, but his microphone was shut off after the group said they could not go past 1 a.m. The microphone was turned back on so the group could thank the fans.

“I really enjoyed it,” said Mike Sanchez, 28, of San Diego, after Outkast’s set. “They came back strong even though they’ve been away so long.”

The rappers luckily dodged the strong winds that hit the festival on Saturday that affected sets by CHVRCHES, Pharrell, desert natives Queens of the Stone Age and many others who still performed despite sand in their mouths.

Like last year, when gusts upward of 35 mph swept through the grounds, organizers made minor stage changes. By Saturday afternoon, the large display monitors were lowered at both the outdoor and Coachella stages. A large chandelier that hung front and center over the outdoor stage swayed throughout the Head and The Heart’s set and was later taken down.

R&B singer and producer Pharrell Williams’ set on Saturday featured him expressing disappointment over his voice because of the “(expletive) wind” despite winning the audience over with a healthy dose of hip-hop with Nelly, Busta Rhymes and Snoop Dogg, as well as DJ Diplo and No Doubt’s Gwen Stefani.

“I’m heartbroken about his voice towards the end,” said Sarah Klegman, 26, of Los Angeles after the show. “I think the crowd was sympathetic.”

Outside of music, the selfie craze was at home in Coachella. Not only were festival-goers using the reflective art installation to snap images, an oversized astronaut reminiscent of the 1990s MTV (“Escape Velocity” spaceman by Poetic Kinetics) also served as the backdrop to photos.

There were subtle changes to the venue this year including the relocation of the Do LaB to the terrace area. For foodies, there was the arrival of many notable L.A.-based restaurants that opened pop-up shops to offer attendees more taste for their buck, plus hand-crafted brews to wash it all down.

A total of 45 people have been arrested in the first two days of the festival, according to the Indio Police Department, including 22 people on Saturday for drug and alcohol-related charges.

All but one of those 22 arrests were for alcohol infractions including disorderly conduct, public drunkenness and minors being in possession of alcohol, said police spokesman Ben Guitron.

Reporters Mariecar Mendoza and Grace Wong contributed to this story.