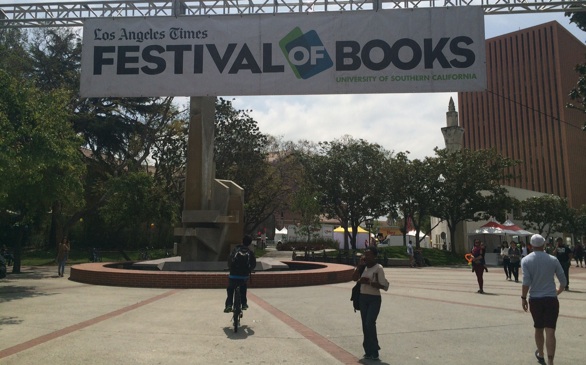 In 1996, the Los Angeles Times came up with a very simple goal: bring the people who create stories and those who enjoy reading them together. That is how the L.A. Times Festival of Books came about and turned into a huge success.

Famous faces made an appearance at USC over the weekend, including John Green (author of The Fault in Our Stars), Veronica Roth (author of Divergent), Rachel Zoe (fashion designer and stylist), Laurie Halse Anderson (author of Speak) and John Boyne (author of The Boy in the Striped Pajamas) to name a few.

Green’s information panel gave audiences interesting insight to not only his books, but also his personal life.

On June 6, his famous book The Fault in Our Stars will make its debut onto the big screen. At the panel, Green revealed he was apprehensive in allowing his story to become a movie when he was first approached. However, once the screenplay was finished and he read the final draft, he accepted the idea.

“The writers were worried that the fans of the book would freak out if they didn’t make the story as true to its entirety,” he said.

The author also mentioned that in every one of his books there is some sort of truth from his life written into the narratives' plots. For example, his novel "Looking for Alaska" deals with the loss of a friend, something that Green once dealt with in high school.

Along with author panels and discussions, local bands and USC students entertained the festival-goers. In addition, there were many opportunities to shop throughout the festival. Exhibitors like the Penguin Book Truck, Pulp Fiction, Hollywood Pantages and Hoy were present, and items that were being sold ranged from books to musical giveaways.

The Festival of Books is definitely an experience unlike any other. Even those who don't like reading will be able to find something that "inspires their fire," so to speak.