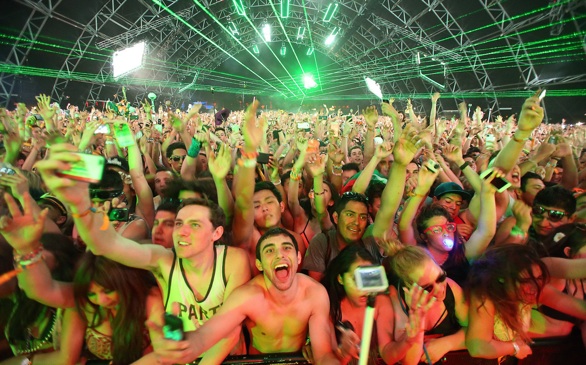 Coachella's great if you're rich, tan and beautiful, but those who fall outside that demographic should know that it's not all rose gardens, $15 artisan cocktails and Baco Mercat wraps.

In fact, those with body image issues or a flat-lined bank account can be forgiven for sensing the occasional gag reflex at the displays on the Empire Polo Club in Indio. For all the music permeating the scene, it can be a very hostile and humbling environment, both socially and musically.

To use the words of one attendee who, trapped in a mass of people trying to get a glimpse of Zedd, said flatly, "God I hate people."

He may sound grumpy, but over three sun-baked days, he often had a point. Though the wonders of the musical weekend are many, it's not all bliss on the polo field. Below, a primer on a few red flags Coachella attendees will have to overcome to prevail. (Note: Many of the observations below are just as likely at other big-ticket festivals this summer.)

1. The dust blew forward and the dust blew back. On Saturday night, it pulverized eyeballs at 20 mph. It pushed through nostrils and into open mouths. Those without a bandana or face mask had to dredge their lungs of mud in the morning. Those fashionable attendees who spent more than 10 minutes prepping their hair wasted their time. It was ruined. Just ruined.

2. People will sit anywhere. Inevitably, in the middle of the biggest performances, scrums of a half-dozen or so remained lounging, as though 80,000 people had just invaded their  picnic. As a result, fully expect to accidentally kick and trip over any number of immovable fleshy objects.

4. Short attention spans. A very unscientific survey found that most Coachellans truly listened to music for no more than 30 seconds at a time. They watched, then they turned to their friends and started talking. They raised their arms, elbowed you, took a photo, elbowed you again -- and didn't apologize. They glanced up, nodded their head a few times to suggest appreciation, then started talking to their buddy again. You will need focus to prevail.

5. Venues get better. Your favorite band is playing 44 times in the next four months. Why would you pay good money to see them amid such indifference when in some overcrowded club the true fans will be uniting in agreement?

6. Think of the children, Part 1. If you have a daughter, you do not want to know what she wore at Coachella. It was way less than you would have liked.

7. Think of the children, Part 2. If you had a son who went to Coachella with his buddies, you don't want to know how they behaved toward your daughters' friends.

8. You are not a filmmaker. More useless concert footage was recorded on smartphones in the fest's first 72 hours than all the film shot during Hollywood's Golden Age. Resist.

9. Most people aren't here for your band. If you came here to get lost in music, you had to work for it. Half the people around you don't seem to have the same idea for that concept.

10. Justin Bieber was there. That's like if 'N Sync had surprised everyone at Coachella '99 with a cameo during Kool Keith's set. This is not the festival for the Beliebers. Or is it?