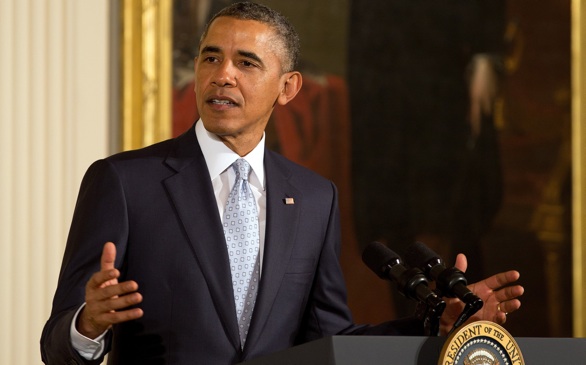 Fired up by the challenge of landing the first sitting president to address Cal graduates since Harry Truman, junior Elias Saigali has practically turned the pursuit into a full-time job.

"There is a way to pull this off," said Saigali, who founded Students for Change at Berkeley this past fall for the sole purpose of wooing the president in 2015. "It's finding that way and finding a way to execute it perfectly."

Few colleges ever see a sitting president behind the commencement-day podium. Stanford University has hosted the presidents of Mexico and Peru, but the closest it has come to a U.S. president was Herbert Hoover in 1935 -- after he left office.

But the already-outsize challenge for Saigali's team seems to have ballooned since what campaigner Samya Abdela called, simply, "the Irvine situation" -- news last month that the president in June would address UC Irvine graduates at Anaheim's Angel Stadium.

Some UC Berkeley students doubt that Obama will come to California two years in a row. But the indomitable Saigali, who wore a suit and tie for his media interview, came prepared to dispel any notion of defeat.

"We can't give up," he said. "We're going to use some different strategies to get the president's attention."

No detail is too small for the Obama-to-Berkeley campaign team, which began chipping away at the giant project 19 months before their graduation day.

Before a formal invitation arrives at the White House this fall, there are online signatures to gather, endorsements to secure, a persuasive film to produce, a pitch to perfect.

The working pitch: Coming to UC Berkeley is a powerful way for the president to show he has made public higher education a priority. Public colleges such as Cal have weathered years of cutbacks in state subsidies and tuition hikes that have made college harder to afford -- another priority of Obama's.

Another argument: Cal students need inspiration from high-profile public servants after hearing from a string of technologists and entrepreneurs, from Craigslist founder Craig Newmark in 2008 to Apple co-founder Steve Wozniak last year.

UC Berkeley on Wednesday announced House Minority Leader Nancy Pelosi would speak at the commencement this May.

Saigali, the son of Jordanian immigrants and himself an aspiring politician, had barely set foot on campus as a transfer student this past fall when he started the graduation campaign. He had tried last year, unsuccessfully, to bring the president to his community college in Santa Monica and considers this a second chance to brush elbows with his political idol.

(His parents are proud of him, he said, but they worry he's taking too much time from classes -- 10 to 20 hours per week. "We're not going to get the results we're looking for by making this a side project," he said.)

One student government leader said she was skeptical at first. "It seemed like a crazy idea," said Safeena Mecklai, a senior. "But Elias had a very strong vision."

Students for Change at Berkeley has won the unanimous support of the student government and the encouragement of the campus chancellor if Saigali can get other campus groups on board. Its petition on Change.org since late last year had 1,600 signatures on Friday.

Saigali said he has been in touch with UC President Janet Napolitano and is optimistic the former cabinet secretary will sign the invitation.

Cal juniors taking a break in Sproul Plaza this week said they will be surprised, but very happy, if Obama says yes.

"People are going to go through the roof about it if the president comes," said Pranati Reddy.